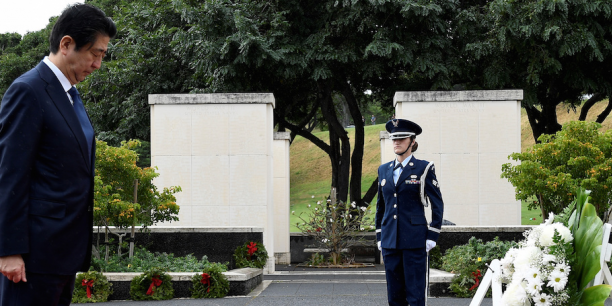 The Japanese Prime Minister, who had been elected on an economic program whose results are mixed with the objectives set, is increasingly present on the international diplomatic scene.
Does the Japanese Prime Minister now seek international recognition through diplomacy rather than economics? One might think of it with his historic visit to Pearl Harbor, the American military port located on an island in Hawaii, which became notorious for the destruction of the American fleet by the Japanese air force on 7 December 1941. An operation which, Precipitated the entry of the United States into the Second World War.

Shinzo Abe made a thundering entrance at the time of his accession to power by promising to leave the country of a 20-year economic slump by a radically new program: the famous Abenomics. Four years later, the picture is mixed, the announced objectives were never fully achieved , to the point that the role of the Japanese prime minister is less focused on the threshold of the new year on the local economy and on the international site from Japan.

The aggressive aims of Beijing in the China Sea worry
Shinzo Abe must cope with the arrival of a Donald Trump at the White House in January whose isolationist temptations worry Tokyo because they would call into question all the diplomatic architecture resulting from the Second World War in Asia. The aggressive aims of China in the China Sea in fact weaken all the neighbors of the Asian giant who wants to assert himself on the international scene as a world power.

Stability Gauge
Indeed, if the Japanese Prime Minister still enjoys a good popularity with his fellow citizens, it is because this conservative politician offers a guarantee of stability since he was appointed to direct the affairs of the country. And if the country fails to really reconnect with the dynamic of yesterday promised to him by Abe, the reasons are partly outside the archipelago which is dependent on the Chinese economic slowdown, the future policy of a new president An unexpected American and a Europe fragile by its doubts and divisions.

If Japanese economic growth remains modest , and should remain low in the coming years, around an annual rate of 0.5%, however, the developer of “abenomics” may bring to its credit a decline in the unemployment rate up To a level of near-full employment.

But it is above all the structural problems whose resolution can only take place over the long term, which still weighs heavily. Thus, tax revenues cover barely 60% of budget expenditures, obliging the government to borrow to cover its needs. This explains a level of public debt that accounts for almost 230% of GDP. Although the rates are low – the 10-year rate is barely 0.10% – due to the monetary policy of the Bank of Japan, the debt service absorbs 20% of the budget.

Beyond fiscal and monetary issues, the main problem for the government, is demographic: its aging population. Japan spends over 40% of its budget on pensions and health spending, which in the medium term raises the very political question of maintaining the current level of pensions due to the increase in their numbers.

New Recovery Plan
To revive the economy, Shinzo Abe who obviously does not doubt the merits of his “Abenomics” chose to persevere. He announced this summer a new stimulus package equivalent to some 250 billion euros particularly in infrastructure spending that are all the more justified as inflation remains low, around 0.5%, the policy the Central Bank has not succeeded in maintaining its 2% target briefly surpassed in early 2014.

But the Prime Minister does not want to commit himself beyond that, particularly in terms of wages. Yet levels of (real) wages have stagnated for 20 years, and that of household disposable income continues to fall. As the Prime Minister’s Liberal Democratic Party is closely linked to the major conglomerates and their interests that dominate Japanese economic life, the industrial apparatus does not change. Sign of this stagnation, productivity is much lower than before 2008.

Finally, Shinzo Abe who relied on his “Abenomics”, following a very right-wing and nationalist political line, could well play on the international stage in 2017 the role of a moderate leader who learned the lesson from Pearl Harbor.