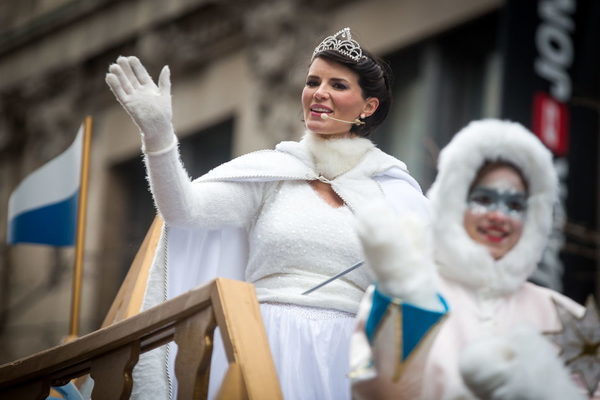 Marie-Ève ​​Janvier slipped for a second straight year of her dress Star Fairy, for the 66th Santa Claus Parade in downtown Montreal this Saturday at 11 am.
“Last year at this time, I had learned that I was pregnant with a little girl, said the singer, still in love with his first participation in the parade. While this year Leah eight months. I hoped she could live it with me, eyes all shining on me Star Fairy. But it is too early for her to understand. Especially the dress that dazzled like all that glitters. Besides, it’s not bad showgirl , one wonders who she gets it! ”
The new mom, also spokesman of natural products Adorable, could not keep up with the idea back on the float: “This event calls my mother a lot of heart. I had never even attended the parade before last year. The children are excited to see Santa, and I’m lucky to be ringside, this is magic. Throughout the journey, lasting almost three hours, we send hand, we send lots of kisses is that pure happiness. It really brings in the holiday spirit. ”

A first Christmas in three
Marie-Ève Janvier and Jean-François Breau will enjoy their first Christmas in three before hitting the road in 2017 with their album tour launched last September, The endless road . “The holiday season has always been important to me. It is a time we spend with family. This year, with a baby, we especially celebrate from noon to 15 pm instead of evening. After, we will resume work. I do not care too much. Our parents are very present for us. I take it two months time. I had no experience before mother Leah. But I soon got taste. I want to continue to live this long. There will surely be other children … ”
Two new floats – The Christmas music and Christmas market – in addition to the parade, which will follow the same route as last year on Sainte-Catherine Street, the street from the Fort to St. Urbain Street.

Let the music
The music will be at the heart of the festivities, especially with the “greedy” tank, where Ari Cui Cui (Ariane Gauthier) and a giant gingerbread man étrenneront excerpts of the show which will open on December 17 and that with members of Quebec Issime, who install their December at Place des Arts from December 9.
♦ The Santa Claus Parade, led by Anouk Meunier and Patrice Bélanger, will be broadcast on TVA and the Yoopa waves on November 20 at 17 pm. Reruns are provided on TVA December 3 to 14 h, and Yoopa December 23 to 13 h.