Astronomers made the discovery in the field of magnetism black holes 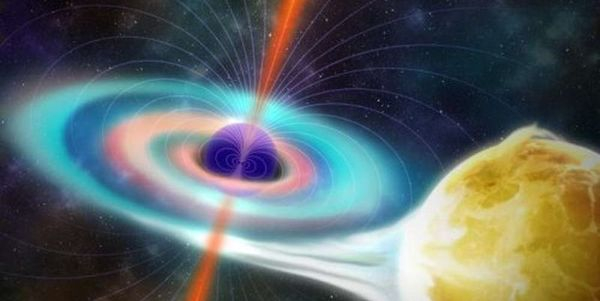 Black holes are known to have great gravity with which they break the stars, absorb matter from the surrounding space and launch into space, the jets, with matter, overclocked to nearly the speed of light, reports Rus.Media.

It used to be that, except the possession of a huge gravity, black holes produce strong magnetic fields that affect the processes occurring in the surrounding space. However, a team of astronomers from the University of Florida, found that in fact the magnetic field of black holes is much weaker than previously thought.

To such conclusions scientists came after observing a tiny black hole V404 Cygni, with a diameter of only about 65 kilometers and is situated at a distance 8 thousand light years from Earth. These observations allowed the scientists with a sufficiently high accuracy to measure the strength of the magnetic field that surrounds a black hole. And, as it turned out, the magnetic field energy of a black hole 400 times below the values obtained by other indirect and approximate estimates.

Produced by scientists measure will bring them closer to understanding the “work” magnetism black holes, to understanding the behavior of matter that were in the most extreme conditions. This knowledge, in turn, can help people to develop new technologies for nuclear fusion, for example, and many other areas.

Measure the magnetic field of the black hole were made by scientists on the basis of data collected in 2015, which involved one of the rare types of lightning a black hole, accompanied by a sharp increase in the intensity and energy of the particles of matter, spewing a black hole in the form of polar jets. This phenomenon was observed using the 10.4-meter Gran Telescopio Canarias telescope and the mounted infrared camera CIRCE (Canarias InfraRed Camera Experiment).

Small black holes, spewing streams of jets are quite rare. Their bursts occur spontaneously and are very short in nature. The flash of the black hole V404 Cygni 2015 lasted only a few weeks, and previous similar outbreak of this black hole was recorded only in 1989.

“Such effects are extremely difficult to catch and study properly, because they only happen a couple of times for one generation of people on Earth,” write the researchers, “this event is a very big success, and its study brings us closer one step to an understanding of the intricacies of the “work” of the Universe.”