China sent to the moon, the plants and insects 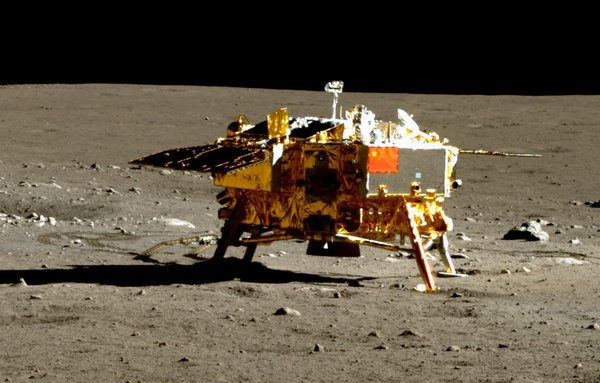 China sent to the moon, the plants and insects
In recent years many space agencies broke out again, the desire to return to the already passed “giant leap for mankind”.

For many, the first landing on the moon marked the transition of humanity into a new era of space exploration, but that fame will fade into the background after the next step in the conquest of space – landing on Mars, reports Rus.Media. However, in recent years many space agencies broke out again, the desire to return to the already passed “giant leap for mankind”.

This year under the Chinese lunar exploration program (CLEP), which is implemented by the China national space administration (CNSA), planned mission “Chang’e-4”. Under the program before the Month was already launched two orbiting spacecraft, as well as one lander with a Rover. Now the Chinese side, there was a desire to study the geological features of Earth’s natural satellite and to investigate the effects of lunar gravity on earth’s insects and plants.

The beginning of the mission “Chang’e-4” is scheduled for June of this year. Within its framework with the help of carrier rocket Long March 5 will be launched lander which consists of a stationary lunar station and Rover. Six months after the spacecraft reaches the desired orbit in the Lagrangian point L2, the moon will be sent a lander with a Rover. The latter, in addition to scientific instruments to study the characteristics of lunar soil, will carry on its Board a special container of aluminum alloy, inside which will contain plant seeds as well as live insects.

“In the container will be seeds potato Arabidopsis and silkworm eggs. Hatch the caterpillars of a silkworm can produce carbon dioxide, while the potato seeds and will be able to produce for them oxygen through photosynthesis. As a result, we can obtain a simple ecosystem”, — told in interview to the local newspaper Chongqing Morning Post chief developer container Qian yen-Hsun.

Interest of the mission adds the fact that the landing of the spacecraft will first be made in the unexplored region on the back side of the moon. This region is the basin of the South pole — Aitken is a huge impact crater in the southern hemisphere of the satellite. Its approximate diameter is 2500 km at the depth of about 13 kilometers, making it one of the largest craters in the Solar system.

For scientists, the crater is of interest not only for its size. In the past astronomers have discovered that this region contains large deposits of water ice. Scientists explain its presence not only actively “bombing” the region with meteorites and asteroids, which could hold water, but the fact that the ice was able to survive there due to the constant exposure in the shadows from the sunlight. Without exposure to direct sunlight water ice in this region is not subjected to sublimation and chemical dissociation.

Since the late 60-ies of studies of the region conducted in the framework of several missions, including “Apollo-15/16/17”, Lunar Reconnaissance Orbiter (LRO) and the Indian “Chandrayaan-1”. In the last that took place in 2008, also carried out the landing of the impact probe, with which the surface of the satellite in space managed to raise the soil particles, which were subsequently studied orbital system. In the framework of this mission was confirmed by the presence of water ice in the crater Aitken. Later data were also confirmed by spacecraft NASA’s LRO.

Due to this discovery, the Pool South pole — Aitken has been considered one of the most suitable sites for the construction of a lunar base. Therefore, from this point of view the mission “Chang’e-4” will also be aimed at clarifying this possibility. In fact, besides a more detailed analysis of the local environment in the framework of the mission, scientists plan to see whether you can grow in lunar gravity living organisms.

Earlier studies carried out aboard the International space station, showed that prolonged exposure to microgravity could be very bad for your health, at least of the human body, but scientists still little is known what effects can be caused by long exposure to low gravity.

The question of the possibility of creating a lunar base at the moment are interested by several space agencies. For example, ESA (European space Agency) expressed the desire to build an International lunar village in the South polar region of the moon to 2030-ies. The topic is not limited to only one wish. Very specific steps the Agency plans to implement after a couple of years. In the framework of a joint mission of ESA and the Russian Roskosmos planned mission to deliver lunar soil samples to Earth. By 2020, in the Pool South pole — Aitken planned to send a robotic probe that will make taking samples of ice. Based on these data, the feasibility of building a base in this place will be considered next.

In the past the us space Agency NASA has also discussed the idea of building a base in the South polar region of the moon. In 2014, a group of engineers from NASA held a meeting with Harvard scientists and other stakeholders. The main issue of discussion was the prospects for lowering the cost of building a lunar base. In the end, we came to the idea of modeling base on one of the American polar stations in Antarctica.

As for the mission “Chang’e-4” if all goes as planned, China will continue to launch robotic missions over the next 15 years will attempt a manned mission to the moon. In addition, there is talk that China wants to build a radio telescope on the satellite. The installation will be deployed on the back side of the satellite, where it will not tend to radioscanner that comes from the Earth.