David Hallyday: Intense boxing with his daughter Emma after the holidays! 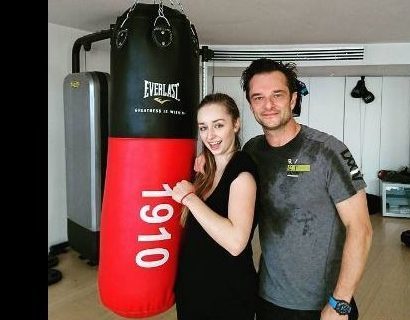 Father and daughter were offered an intense sports session.

Certainly David Hallyday does not 50 years but, as with ordinary mortals, after excesses, it needs to regain control. While the celebrations are over, the singer has offered himself a saving sporting session, accompanied by his daughter Emma.
On Instagram, David Hallyday posted January 2 a picture of him and his 19 year old daughter , born from his former marriage to Estelle Lefebure . The duo, which is rarely seen together, was very smiling despite visible efforts as evidenced by the sweat on the singer’s T-shirt. In the program ? A boxing class! Did Emma, ​​who did a film school, prepare for a film or just keep fit? Mystery … The duo seems in any case to have celebrated the new year in the South of France since David Hallyday geolocated his photo in the marina Baie des Anges. Yet he lived for some years in London with his new wife, Alexandra Pastor, and their son Cameron (12 years).
David Hallyday, also dad Ilona Smet (21), recently made his return to the music coming out the disk ‘s a life time (Polydor).