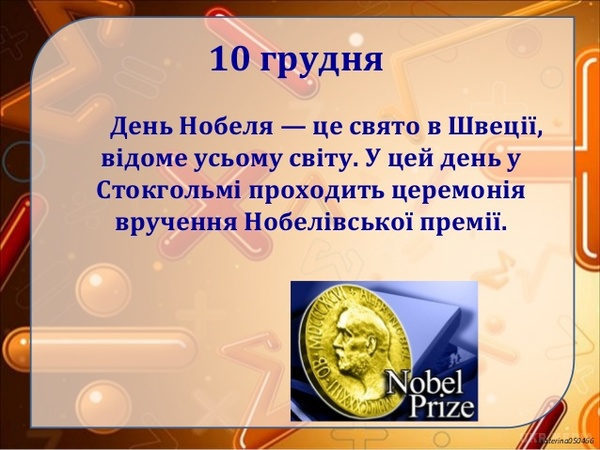 December 10 – the Nobel day-the ceremony of awarding the Nobel prize
Nobel prize day is one of the key events in the social and intellectual life of Sweden and Norway.

One of the key events in social and intellectual life of Sweden and Norway — Nobel day (Nobeldagen) — the ceremony one of the most prestigious international awards — the Nobel prize, which takes place annually on 10 December, reports Rus.Media. It is awarded for outstanding scientific research, revolutionary inventions and major contributions to the culture and development of companies and enjoys an international reputation as the most honorable civil distinction.

Its founder was Alfred Nobel — famous Swedish chemist, engineer and inventor, on account of which 355 inventions (the most famous among them is dynamite). During his life, Nobel amassed an impressive state (most of it he got right thanks to the introduction of their own inventions), the bulk of which he bequeathed to the institution of the international prize. By the way, the latest version of his famous bequest of Nobel signed almost a year before his death — November 27, 1895.

The result of this Covenant was the organization of the Nobel Foundation. Today, for the Nobel prize in all fields of science and culture meet the Swedish organization. The exception is the Nobel peace prize – who should award this award, decides the Norwegian Nobel Committee.

There are several interesting points that reglamentary the selection of the winners. So, the Nobel prize can be awarded only individuals, not companies (again with the exception of the peace Prize — it can be awarded to individuals and organizations). One category of the Nobel prize may be awarded to two works. This rule was introduced only in 1968, the de facto has always been respected. Cash reward in this case is divided equally between first works and then the same equally between the authors.

In Stockholm, the king of Sweden presents the awards in physics, chemistry, physiology or medicine, literature and Economics

The Nobel prize cannot be awarded posthumously. But if the applicant was alive at the time of the announcement of the awarding him the prize (in October) and died before the ceremony (10 December), the prize remains. Prize may not be awarded if the members of the relevant Committee did not choose a worthy of for the contest. In this case the prize funds are kept until the following year. If and when will not be awarded, they are transferred to the private reserve of the Nobel Foundation. In turn, the laureates received awards should speak with the so-called “Nobel memorial lecture”, which is then published by the Nobel Foundation in a special volume.

The awards nominees preceded by a lot of work being done throughout the year by numerous organizations around the world. The final selection of winners is carried out by the Royal Swedish Academy of Sciences, the Swedish Academy, the Nobel Assembly at the Karolinska Institute and the Norwegian Nobel Committee. This usually occurs in October. And on December 10, the anniversary of Alfred Nobel’s death (10 December 1896), winners of the award in the capitals of the two countries.

In addition to the awards ceremony, the celebrations devoted to this event include two important components, the Nobel prize dinner and the Nobel concert.