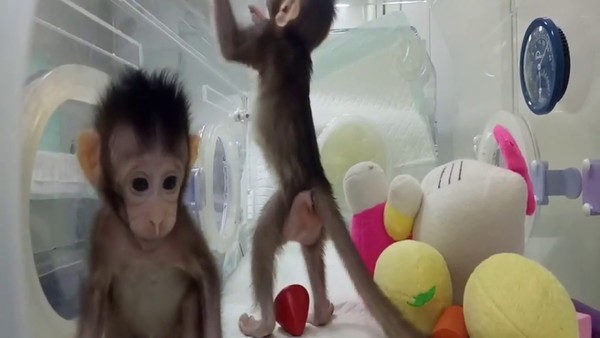 In China, the world’s first cloned monkey (video)
Geneticists were able to create two copies of the monkey using the same methods by which cloned Dolly the sheep and other mammals.

A group of scientists from the Chinese Academy of Sciences reported on the success in cloning, reports Rus.Media. They managed to create two identical copies of macaques. This was reported in the study, which was published in the respected scientific journal Cell. Macaque crabeater Junjun and hoihoi got their names from the Chinese word Zhonghua, which means the Chinese people as a sign of the national importance of this event. Geneticists were able to create two copies of the monkey using the same methods by which cloned Dolly the sheep and other mammals. It was assumed that this method will not work in the case of primates, however, the Chinese biologists managed to develop its own technology to clone monkeys. To improve existing methods it took scientists two years. They are faced with a huge number of errors and failures”, and the first clones died a few hours after birth. The probability of death of cloned monkeys have significantly reduced due to the fact that scientists added mRNA and trichostatin And that has helped to stimulate more than two thousand genes. They also use current to simulate fertilization with subsequent embryo production. The study authors note that while there are no barriers to human cloning. It is only necessary to solve the question of what are ethical plane. “Cloning primates, including people, technical barriers are no more, — told National Gegraphic research associate M-Ming Poo (Mu-Ming Poo). — However, the reason we rasili to destroy this barrier, the production of animal models that will assist in the treatment of people.” Previously, scientists have “cloned” monkeys, however, were born identical twins, not clones. In this case, macaques are completely identical and develop normally. Their age is eight and six weeks respectively. The government supported the project biologists and are ready to assist in further study of the condition of the primates. First, research by Chinese scientists aimed at improving methods of combating cancer, disorder of immune system and other genetic diseases.