It is interesting to know. Sparrow is one of naposin birds 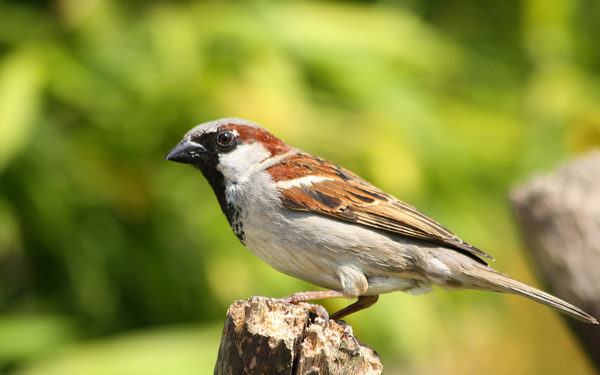 We are most likely to occur 2 species. This is the tree Sparrow and house Sparrow.

Let’s start with the Field Sparrow, which according to the decision of the Ukrainian society for the protection of birds recognized by Bird 2010.

The tree Sparrow (Passer montanus) is a very small bird, weighing 20-25 grams, and length is 14-15 cm, the size of the wings 20-22 see the top of the head covered with a brown “cap”, in the cheeks and chest and black spots. The trunk is covered with gray feathers, and the wings are black-grey with brown stripe. Small tail length of 5-6 cm.

Found this small bird almost throughout Europe, and significant parts of Asia – from the Arctic circle, the Ural mountains and the southern foot of the Himalayas in the East to the Pacific coast, and that is quite inhabits China.

Regarding the food, the field Sparrow is unpretentious. Feeds on seeds and fruits of plants, in the spring and insects.

For the arrangement of the nests of the field Sparrow uses dry and green grass, especially the likes of wormwood, plant down, wool and feathers. If necessary, they will skillfully weave of grass rounded nest, he is the closest relative of the African tkacik. Such a nest clearly visible in autumn, particularly in branches of the wild grape among the branches of the trees. Begin nesting in April and early may. The clutch can be up to 7 generously speckled eggs. The parents hatch the babies one by one, before the first chick is from 10 to 14 days.

Widely known for the campaign for eradication of sparrows as pests of agriculture, held in China in the 1950-ies. During deployed in March-April 1958 of the campaign for three days in Beijing and Shanghai were destroyed 900 thousand birds, and by the first decade of November of the same year in China, according to incomplete statistics, 1960 million were exterminated sparrows. However, this struggle led to a massive spread of pests in the spring and summer of 1959 in Shanghai and other cities. March 18, 1960, Mao Zedong had made a personal decision about the suspension of the fighting sparrows.

House Sparrow, or house (Passer domesticus). Probably the most famous bird that lives next to the man. Hence the name “home”. Common like field Sparrow, except that he still inhabits India, but in China, it can be seen only in the border zone in the North and in the South-West. In appearance and lifestyle, it differs little from the field. Its length is 16 cm, weight 22 to 25 grams. However, unlike the field Sparrow, whose “cap” brown, home of the Sparrow is gray. Other external features are almost identical.

Males differ from females by the presence of a large black spot covering the chin, throat, craw and upper breast, and dark gray (not dark brown) top of the head. The female has the head and throat are grey, and above the eye there is a pale gray-yellow stripe.

By the beginning of XXI century the European population home of the Sparrow has declined significantly, and in some countries this species was on the brink of extinction. Since the mid 80-ies the population of sparrows in the Czech Republic decreased by 75% in the UK – 68%, and in the major cities of Britain have virtually disappeared. The reasons are decrease in the number of insects during their breeding period, diseases caused by high content of pesticides in cereals, the disappearance of nesting sites in cities due to their reconstruction, the reduction of green urban areas and the destruction of trees, which again leads to the death of insects required for feeding the Chicks.