Letizia of Spain: Duel of look for its debut in 2017 with Felipe 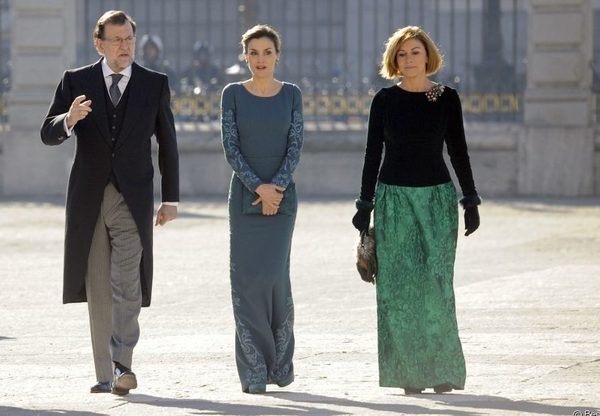 First outing of the year for the royal couple, accompanied by a newcomer. 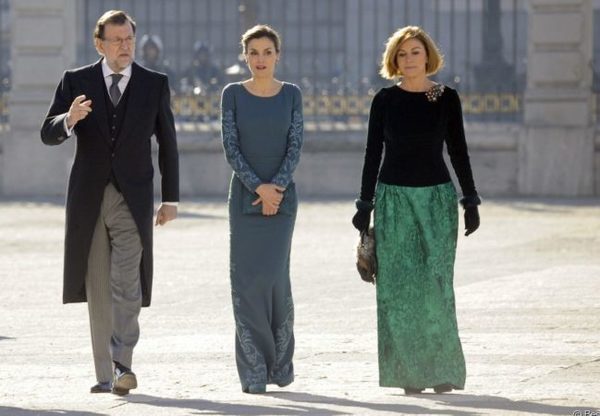 This time, King Felipe VI and Queen Letizia of Spain were not surprised to be accompanied by their daughters Leonor and Sofia, as at the opening of Parliament last November … But there was Nevertheless an air of novelty in the immutable ritual of the beginning of the year: on the occasion of the Military Passover which constitutes each year, on January 6, its first official engagement, the royal couple officiated with the new Minister of Defense, María Dolores de Cospedal, posted since November. And the government representative supported the comparison, associated with the first fashionista of the country!
For the occasion, the Queen Letizia, the momentum of the end of 2016 sexy , decked herself a tight dress signed by its designer of occasions, Felipe Varela. A duck blue creation falling to the ground, as required by such an event; moreover, it is precisely that dress she wore for that appointment in 2015 , when Felipe and she presided for The first time as king and queen! As for María Dolores de Cospedal, the 51-year-old minister had a good intuition by opting for a mint green skirt printed with a long-sleeved green pine top. On the men’s side, it was military uniform of ceremony for the sovereign and tail-of-pie for the Prime Minister Mariano Rajoy.
Tradition dating back to the eighteenth century, the military Passover provides the opportunity to the ruler of his first speech of the year, fourteen days after the speech of Christmas . After the reception of the royal couple by the ministerial staff (including the new Minister of the Interior, Juan Ignacio Zoido), protocol (national anthem and salute of 21 cannon shots) and the magazine of the Royal Guard, Which he reinstated in 2015, Felipe spoke to some 150 representatives of the three corps of the Army and the Civil Guard. ” We must spare no effort to increase our capacity to prevent and respond to this scourge of terrorism which threatens our society despises our democratic values and is an enemy of humanity ,” said he particularly stressed at The military ceremony, which was followed by a reception.