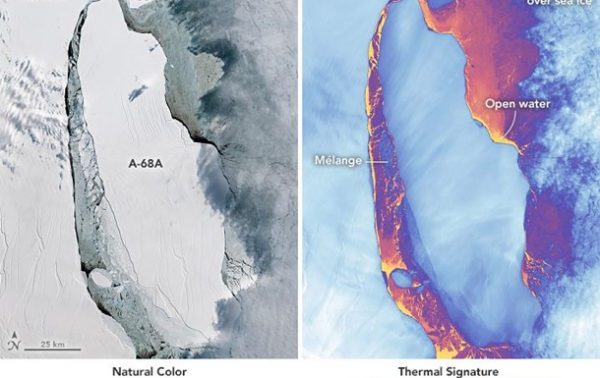 NASA employees released photos trusovskogo a giant iceberg
Floe, for the first time in detail are shown in the picture, was part of the ice shelf Larsen.

Employees, NASA released detailed images of a giant iceberg that has broken away from a glacier Larsen this summer, reports NASA’s Earth Observatory, reports Rus.Media.

Photos show that the iceberg began to break up into two parts because of the constant movement.

“The first pictures were received only in mid-September of this year. As shown by the several weeks of observations, iceberg A-68 first “rocked” the place, moving back and forth, causing him to split in half,” – said the Agency.

Also, experts noted that this iceberg had to learn using only radar and infrared images. This was due to polar nights, which prevailed in the Antarctic.