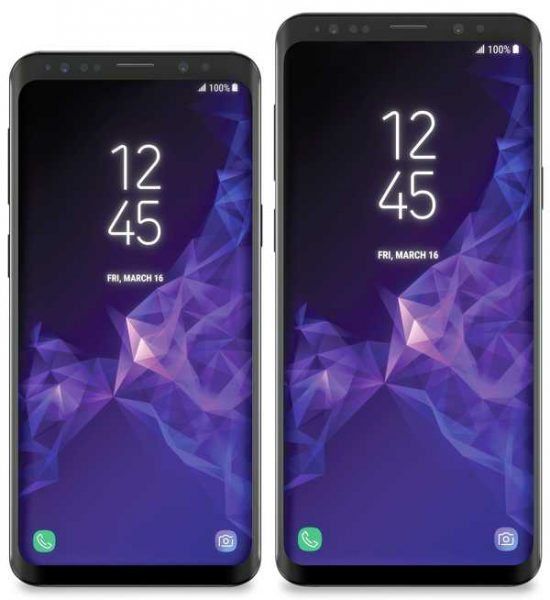 Samsung Galaxy S9 is the flagship smartphone coming soon!
Will officially unveil the gadgets at the end of February.

Will officially unveil the gadgets at the end of February.

In the network appeared the new image of the Samsung Galaxy S9 of the flagship smartphone Galaxy S9 Plus and latest information on their specifications.

It is expected that Galaxy S9 will get a 5.8-inch and Galaxy S9 Plus – 6.2 inch Super AMOLED display. In the United States and China, the smartphone should come with the new Snapdragon chipset 845, and in other countries expected to come with Exynos option from Samsung 9810.

The older model will be equipped with 6 GB of RAM and 128 gigabytes of internal memory, and the youngest is 6 and 64 gigabytes respectively.

It is expected that the Samsung Galaxy S9 Plus will receive a double main camera, and Galaxy S9 – single, with a resolution of 12 megapixels. Both smartphones are lenses with a good aperture of f/1,5 – f/2.4.

The camera will get a number of interesting features: for example, Super slow-mo that allows you to record video with a resolution of 480 frames per second at 1080p, and also support optical image stabilization.

Will officially unveil its flagship smartphones Galaxy Galaxy S9 and S9 Plus Samsung will present on February 25, the day before the official opening of the exhibition MWC in Barcelona in 2018. A message posted on the company website.

On the German website of Samsung has already launched a support page for new gadgets. It marked the smartphone codenamed SM-G960F/DS. This is probably the model with the Dual SIM technology that will be available, including in Europe.

On sale the new flagship from Samsung will arrive on March 16.