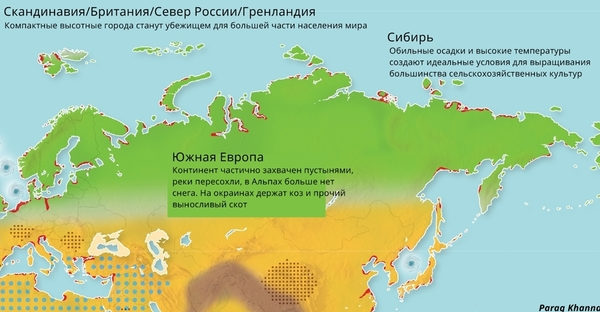 That’s how the world would look like if the Earth’s temperature will rise by only 4 °C
And you complain about the snow!.

Parag Khanna publishes a map of the world after the temperature has risen 4 °C, passes Rus.Media.

Micronesia is completely flooded, Pakistan and South India abandoned, Europe is gradually turning into a desert… But there is good news: West Antarctica is now populated instead of glaciers there is a thriving new city. And Northern Canada, Scandinavia and Siberia gather rich harvests to feed millions of climate refugees who settled in these regions.

This map clearly shows the consequences of global warming, if not urgently take action. Of course, it’s based on computer models, but there is every reason to believe in such predictions.

Here’s the entire map in the original:

Maybe it’s time to move to Greenland before it’s too late?