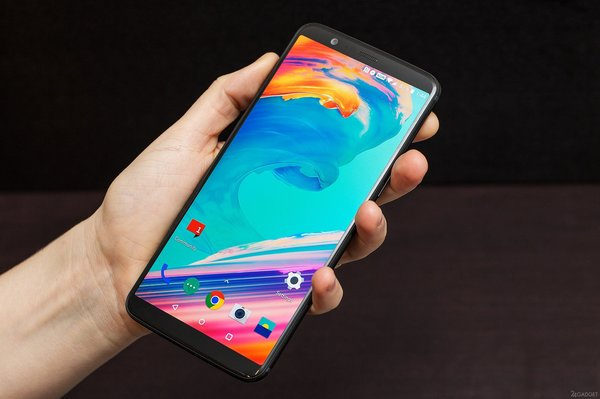 Top 5 smartphones from the Chinese manufacturer at a price of about $ 500
MWC is behind us, but, unfortunately, the West did not bring us any new additions to our list.

Thus, while waiting for the launch of new devices that will be released before the end of the month, we present five of the best phones from China, available now, and the cost of which is estimated at up to $ 500!

OnePlus 5T, released in November 2017, as before, is one of the best smartphones that you can buy from the Chinese manufacturer. The phone has a Qualcomm Snapdragon processor 835, together with 6 GB of RAM and 64 GB of internal memory.
The phone is full-screen design with a very thin top and bottom frames.

The display on OnePlus 5T has a large 6,01-inch Full AMOLED Optic with a ratio of screen-to-body 80.5% of trend and an aspect ratio of 18: 9.
On the rear panel has dual camera with a 16 megapixel primary sensor and a wide angle with a 20-megapixel secondary telephoto sensor which is used in low light conditions. On the front panel is a 16-megapixel front camera.

Finally, capacity 5T battery is 3300 mAh. The phone supports fast charging 20 watt with charging Dash. The phone runs with OxygenOS based on Android 8.0 Oreo, and works in virtually all 4G LTE networks around the world.

Xiaomi Mi6 are still on the list. The device Xiaomi is still one of the best phones that you can buy for $ 500. It offers powerful Qualcomm Snapdragon processor 835, 6 GB of RAM and 128 GB of internal memory – and all this you get cheaper than the above prices.

Mi6 is also a great option for those looking for a smaller device because it is equipped with a 5.15-inch Full HD display. The phone has a dual rear camera with main sensor, 12 megapixel (with F / 1.8 aperture and OIS) and a secondary telephoto sensor at 12 MP.

Xiaomi Mi6 comes with a battery capacity of 3350 mAh battery with support for Qualcomm Quick Charge 3.0. The phone supports 4G LTE networks, but there is no support for band 20.

Smartphone Nubia Z17S takes its place in this list as one of the most promising and powerful devices that are currently on the market. The phone set includes the flagship processor Qualcomm Snapdragon 835, 6 GB of RAM and 64 GB of memory. The phone has a display at 5.77 inches with a resolution of 1080×2040 pixels, with ultra-thin side frames.

Nubia Z17S comes with two rear cameras, which represent a 12.2-megapixel sensor (with F / 1.8 aperture and OIS) and a secondary 23-megapixel sensor-B & W. Double front facing camera is much simpler – a pair of 5-Megapixel sensors (with aperture F / 2,2).
Also, the smartphone is equipped with a battery capacity of 3100 mAh battery with support for Quick Charge 3.0. It is equipped with NFC, but no 3.5 mm headphone Jack. The 4G LTE connectivity works with virtually all networks around the world.

However, if “full screen” design and slim side panels is not your priority, then a simple Z17 may be the best option because with it you can get 8 GB of RAM and 128 GB of memory for about the same price.

View Honor 10 – the flagship of the company Huawei, who works for the Chinese SoC. The phone shares almost the same hardware filling as the far more expensive Huawei Mate 10 Pro ($800), it costs almost half the price.

In addition, the phone is equipped with a large Honor of 5.99-inch display with a resolution FHD + dual rear camera includes a main 16-megapixel RGB-sensor (F / 1.8) and secondary 20-megapixel monochrome sensor. Front end features a 13-megapixel front camera with F / 2.0 aperture) with the support of Al, which provides authentication of the phone via facial recognition.

View 10 operates from a battery with a capacity of 3750 mAh, supports Huawei Super Charge 3.0. The phone is running Android 8.0 Oreo, and works in networks 4G, but the group of 20 is not included in their number.

Despite the fact that Xiaomi Mi Note 3 is not a “real leader”, he gets a place on our list for a great compromise between build quality, specs and price. It costs about $ 300.

The rear camera presents sensor 12 MP (aperture F / 1.7), and how proven, is one of the best camera Android smartphones (according to DxO Mark). It is also equipped with OIS (optical image stabilization) and delivers 4K video recording, plus a slow motion (120fps). The front camera boasts a high resolution 16 megapixels.
Xiaomi Mi Note 3 is powered by a battery capacity of 3500 mA. The phone runs MIUI V9 for Android 7.0 Nougat.