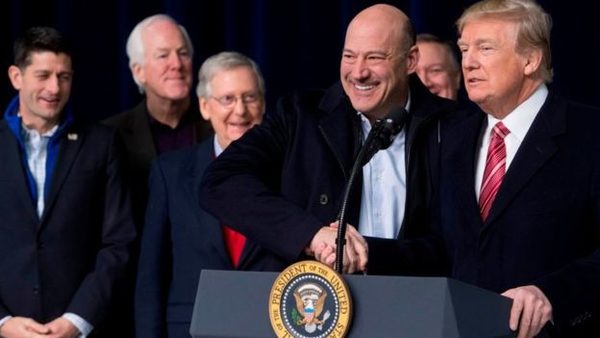 US President Donald Trump’s trade war with China is backfiring and impacting the US economy, according to his former chief economic adviser.

The tariff battle has had a “dramatic impact” on US manufacturing and capital investment, Gary Cohn told Radio 4’s Today programme.

The trade war was “a very convenient excuse” for China to slow down its overheated economy, he added.

Mr Cohn, a free trade advocate, resigned from the Trump administration in March 2018.

The 59-year-old former president of Goldman Sachs bank was an unusual hire for Mr Trump because he was a Democrat in a Republican administration.

Mr Cohn served as director of the National Economic Council in the Trump administration from January 2017 to April 2018, announcing he was resigning after Mr Trump decided to impose import tariffs on steel and aluminium.

“I think the Chinese economy is driven by credit and credit availability,” Mr Cohn told the BBC’s Today programme.

“I think the Chinese economy was going to slow down with or without a trade war,” Mr Cohn said.

The idea that tariffs would solve trade imbalances between the US and China was a “long-time view” of Mr Trump’s, Mr Cohn added.

However, he said Mr Trump was right to try to tackle China’s theft of US intellectual property and blocking of US companies’ access to Chinese markets.

But he warned: “I think everyone loses in a trade war. We are an 80% service economy. The service side of the economy is doing very well, because, guess what, it’s not being tariffed.”

Mr Cohn said the tariffs had made it expensive to import vital products from China, counteracting the effects of Mr Trump’s tax cuts, which were designed to stimulate the US economy.

He said: “When you build plant equipment, you’re buying steel, you’re buying aluminium, you’re buying imported products and then we put tariffs on those, so literally the tax incentive we gave you with one hand was taken away with the other hand.

“So we are not seeing the manufacturing job creation. And I think if we get through this tariff situation, there’s a real opportunity to see it here in the United States.”

In a separate BBC interview, Joseph Hinrichs, president of automotive at US carmaker Ford, said the impact of Mr Trump’s tariffs on his business had “subsided” since last year.

“Last year, there was a significant impact to our business because of steel and aluminium tariffs,” he said.

“Actually, we’re net exporters of vehicles to China, so that the increased tariffs last year were put on in retaliation to the US tariffs, that hurt us last year, but they’ve come back down to 15%. They were 40% in the second half of last year.

“Of course, there’s more tariffs on parts and autos coming into the US.

“We’re still seeing some impact from that, so on balance, we’re still paying for some of the increased tariffs, but they’re not as bad as they were last year.”