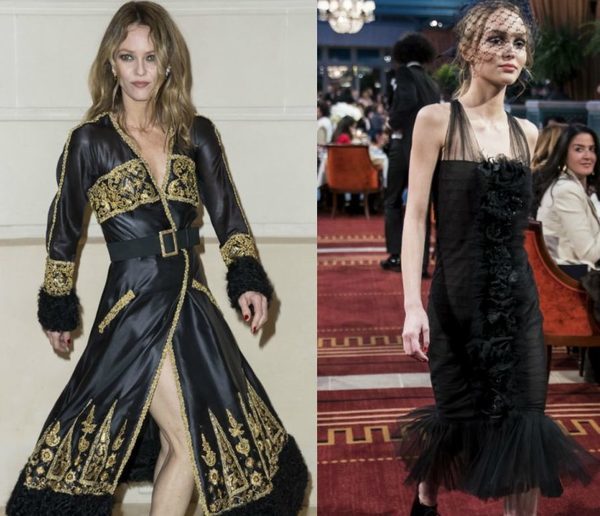 The stars were meeting for the annual parade “Crafts”. 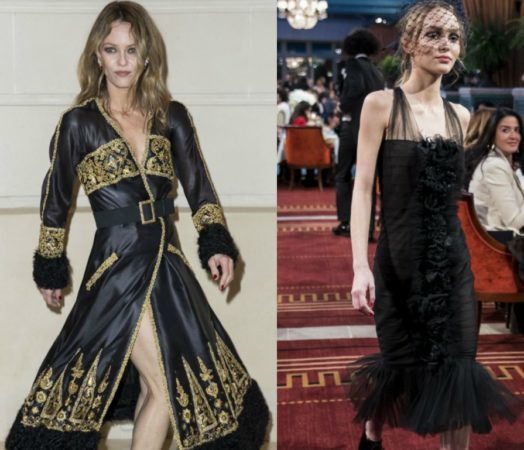 Between Fashion Week, Chanel provides solo show as part of a traditional parade celebrating Crafts. Appointment was given in a Ritz brand new to Paris to meet demand and fill its audience, the house of Karl Lagerfeld hosted two shows. Among his many guests, the famous designer did not fail to shine the spotlight on the clan Paradise.
In the first show, Karl Lagerfeld has left his new face No. 5 , Lily-Rose Melody Depp , open the show solo in a look tribute to Parisian chic. The young woman was alone since her mother, Vanessa Paradis , was one of the stars of the second show. The singer and actress has also magnetic eyes in an exotic satin dress evoking some oriental flavor, between embroidery in gold and black fabric. Mom and took the pose for the cameras, before finding her sister Alysson Paradis near the catwalk to discover this collection designed to showcase the valuable expertise of Chanel workshops and crafts such as shoemaker, the creaser, the plumassier or the inevitable embroiderer.
In the first show, Ludivine Sagnier , Marie-Ange Casta , Audrey Marnay , Clemence Poesy , Celine Sallette or Ines de la Fressange enjoyed the spectacle of the trades, as Diane Rouxel (the revelation of High Head ) and the lovely Ariane Labed (which soon will find in Assassin’s Creed ). Mathilde Wargnier, Anamaria Vartolomei, Melusine Ruspoli, Tugba Sunguroglu and Gwei Lun Mei also were among the faces of this first show which Cara Delevingne , another favorite of Lagerfeld obviously participated – like the small Hudson Kroenig (the godson of Karl Lagerfeld ) – dancing with one of the twins twins, in the eyes of Pharrell Williams .
On the second, we will include cross Anna Mouglalis , Elodie Bouchez platinum blonde Willow Smith with her mother Jada Pinkett Smith , Clotilde Hesme , burning Cécile Cassel , Ella Purnell, Amber Valletta, Rowan Blanchard, J. Balvin but Geraldine Chaplin ( Charlie’s daughter), Cuba Tornado Scott, Alma Jodorowsky, Bella Heathcote (which is found in February at the poster Fifty Shades Darker ) or Baptiste Giabiconi , another familiar home of Coco Chanel. All under the eyes of Mohammed Al-Fayed, the owner of the places where Coco Chanel rented a suite in which she lived the rest of his life in 1971.