A third victory in a row for the Impact 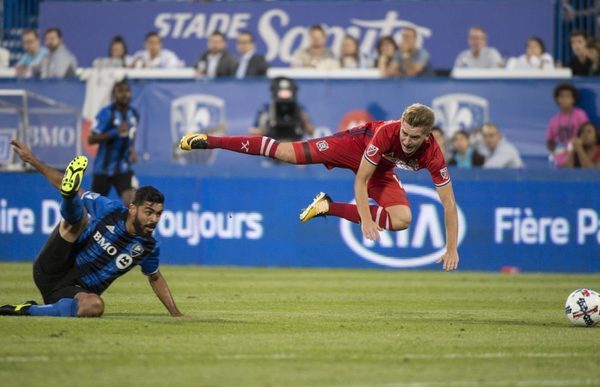 The Impact will not become an easy prey.

Less than three weeks after reaching the bottom of the barrel, the club has roared by signing a victory of 3-0 against the Fire in Chicago on Wednesday.

The Impact had been humiliated 4-0 by the Red Bulls of New York on the 29th of July last. Since then, the troupe Mauro Biello has signed three wins in a row for the first time in 2017.

“When you take a slap in the face, it is not necessary to present the other cheek, said the captain of the Impact Patrice Bernier. It has awakened our spirits. Match after Match, we demonstrate our real talent, our true potential. “

The Impact (9-6-6) approached to within two points of Atlanta United, and the sixth and last place giving access to the series in the association. The troupe Mauro Biello points two points behind the Columbus Crew, in fifth place, but with two games in hand on its rival.

A Piatti gala has hosted the show while the Argentine was delighted with the 19 894 spectators with his 11th and 12th goals of the season in the first half. Matteo Mancosu has also shone and he scored his first goal since June 10, before half-time, putting an end to a shortage of nine meetings.

On his side, the Fire (12-7-5) has extended its slide, while the band at Bastian Schweinsteiger has only one victory in his last six outings (1-4-1).

The Impact will end his streak of three games in eight days by hosting Real Salt Lake, Saturday.

The defenders of the Fire have had to have trouble sleeping after having been stunned by the actions of Piatti, Mancosu and Blerim Dzemaili in the first half.

Christian Dean was the first to gaffer in the sixth minute, a few moments after he had made his entry in succession to Joao Meira, wounded. The release of Dean after a centre midfielder Patrice Bernier deflected against Piatti, who was then the first to get the ball in the penalty area visitors. Piatti subsequently calmly beat goalkeeper Matt Lampson.

The Impact has had a small fright in the 28th minute, when central defender Laurent Ciman appeared to hurt his left ankle in landing after jumping to try to reach a ball. After a few minutes of worrying, Ciman is finally remained in the game.

Mancosu has knocked at the door in the 33rd minute, but it ran out of space after having escaped behind the defence of the Fire and his shot went straight into the legs of Lampson.

Two minutes later, Mancosu has got another great opportunity, but his shot missed the frame.

The third time was the right one for the Italian attacker. Lampson was tripped in the box of the visitors in the 36th minute, forcing the referee Nima Saghafi to call a penalty shot. Mancosu has covered just from the point of penalty, scoring his fourth goal of the season.

Upon the resumption of the game, Piatti found himself one against one with the back Jonathan Campbell. Rather than try to work around, Piatti has opted instead for a shooting lecture from a twenty meters to the far side, leaving no chance to Lampson.

In front of a large deficit, the Fire was not particularly threatening in the second half.

David Camic has shaken up the ropes at the 58th minute, but the goal was quickly cancelled because he was in an offside position.

Camic has then been frustrated by goalkeeper Evan Bush in the 68th minute when he was not much space to shoot.

At the other end of the field, Lampson has private Mancosu of a is doubled the stopping in a breakaway in the 77th minute.