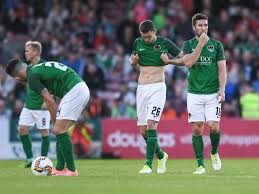 July 20 at 20:00 in Larnaca at the stadium “AEK” Cypriot AEK Larnaca in the second leg of the return of the qualification of the European League, will take the Irish Cork City. The first game ended with a victory of the Cypriots 1: 0.

AEK Larnaca vs Cork preview
The Cyprus Championship has not started yet, but AEK Larnaka is already actively playing official matches, and considering the last season, he does not know defeats in 9 matches in a row. The Cypriots in the last round of the European Cup have passed Lincoln City 5: 0, 1: 1. And in the first game with the Irish they won on the road 1: 0, in general in an equal match. AEK at home in 2017 has played 13 fights, of which he managed to win in 8 meetings, three draws and lost two matches. Last time Larnaka did not score points at home on February 22.

AEK Larnaca vs Cork prediction
Cork City sensationally lost in his field in the first match, interrupting the series without defeats in all tournaments that lasted since October 28. In the current championship of Ireland Cork City after 22 rounds with 61 points leader, with a margin of 15 points from the nearest pursuer. In the European League, the Irish have already passed one round, in the face of Levadia 2: 0, 4: 2. The no-lose Cork City series on the road is 14 matches and lasts from October 28, 2016, during this time the team won 13 times and one game ended in a draw.

I think Thursday’s game will turn out to be interesting and equal, a big score is not to be expected in it. Guests will try to win back, so a plus on them in this match will bring a minimum return. Bet: Cork City will not lose more than 1 goal – F2 (+1).