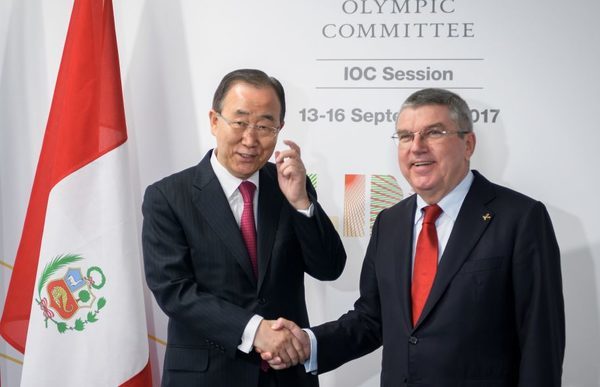 Lima — The South Korean Ban Ki-moon, former secretary-general of the united Nations, was elected on Thursday to the presidency of the ethics commission of the international olympic Committee (IOC), during the 131st session, held in Lima, peru.

Ban Ki-moon, 73 years of age, has completed two terms as secretary-general of the united nations (2007 to 2016). He had succeeded to the position in the Ghanaian Kofi Annan.

It succeeded to the presidency of the IOC ethics commission in Senegal Youssoupha Ndiaye, in office since 2007. This commission has the power to open investigations against members of the IOC and proposing sanctions then imposed by the executive board.

“I will do everything I can to improve the accountability and transparency of this great organization so that we can enjoy the confidence of the rest of the world,” said Ban Ki-moon before the press.

In addition, the olympic movement is far from being serene to five months of the opening of the winter Games of Pyeongchang, in South Korea, due to tensions related to North Korea and uncertainty, such as before the olympic Games in Rio, on the participation or lack of participation of the Russian athletes due to accusations of doping widespread.

“I can assure you that the olympic Games in Pyeongchang will be a place where athletes can express themselves without concerns “, stated Ban Ki-moon.

“South Korea works very closely with many countries such as the United States and the members of the security Council of the united nations to resolve the nuclear issue of north korea “, he added.