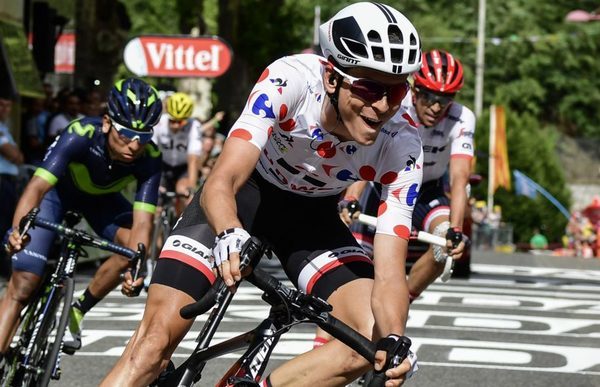 Foix — Warren Barguil (Sunweb) won the 13th stage of the Tour de France, Friday, Foix, the fourth success of a French rider from the start.

The champion of Italy’s Fabio Aru (Astana) retained the leader’s yellow jersey at the end of this second day pyrenean, exciting, end-to-end.

On this day of national Celebration, Barguil was set to sprint his three breakaway companions, the Colombian Nairo Quintana and Spaniards Alberto Contador and Mikel Landa.

“I had super legs !” exclaimed Barguil, winner for the first time on the Tour. Last Sunday, he had been beaten narrowly by the Colombian Rigoberto Uran after review of the photo finish to Chambery.

“I take pleasure as ever on my bike, to attack as I did when I was an amateur,” added the young Breton (25 years old), who has consolidated his position at the head of the mountain classification.

Photo: Philippe Lopez, Agence France-Presse
With the win, Warren Barguil clinched his position as leader of the mountain classification.

If Barguil has attacked from the start in Saint-Girons, before being taken, Contador and Landa have inflamed the long stage just 101 kilometers, but with three passes of the first category.

The Spanish pair has emerged on the top of the first pass (Rub), 71 kilometers from the arrival, in the company of Barguil. It is moved to the front at the top of Agnes, but was joined before the top of the wall of Péguère by Barguil and Quintana.

In Péguère, and then on the long descent to Foix, the first four of the Tour (Aru, Froome, Bardet, Uran) are neutralized in spite of many start-ups.

On the final, the Irishman Dan Martin and British Simon Yates were eluding to their companions to nibble on a few seconds.

Aru and his rivals crossed the line with a delay of 1 min 48 s Italian, attacked by the team of Froome, who tried to weaken it, has nothing transferred to his direct opponents.

In the general classification, Landa, lieutenant of Froome, closer to fifth, 1 min 9 s of the Aru, which had lost its lieutenant in the Danish Jakolb Fuglsang.

Winner of the recent Dauphiné, Fuglsang has been distanced in the first kilometres, two days after falling on the road, Pau (microfractures to a wrist), and eventually gave up.

Saturday, the 14th stage connects on 181,5 km-Blagnac airport at Rodez and ends with a “wall” of 570 metres at 9.6 per cent, to the advantage of the punchers. In 2015, the Belgian Greg Van Avermaet, the future olympic champion, had gone ahead of Peter Sagan.