Barguil wins the 18th stage of the Tour de France 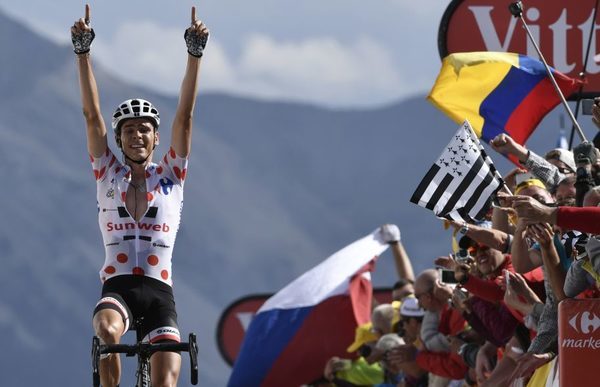 Photo: Philippe Lopez, Agence France-Presse
The altitude of 2360 metres, Warren Barguil has won a success of prestige, his second in the Tour after the one of Foix acquired the 14th of July.

Briançon — L’izoard, one of the mythical passes of the Alps, has dedicated Warren Barguil, winner of Thursday’s 18th stage, but also the British Chris Froome who was able to resist the attacks of Romain Bardet in the final summit finish.

The altitude of 2360 metres, Barguil has won a success of prestige, his second in the Tour after the one of Foix acquired the 14th of July. The young French (25 years), which insured his polka dot jersey of best climber, has signed his fifth stage victory in france since the start of the Tour 2017.

For the general classification, Bardet tried to force destiny. The French champion attacked without being able to outpace Froome, who finished on his wheel.

Exhausted after the race, finished in third place, 20 seconds of Barguil, Bardet said, ” I thought I was going to suffocate in passing the line. I really gave it all ! “

“I played tactically, I believe Froome that I wasn’t that great. I’ve done the race that it was necessary “, said the Auvergnat, who has been working his AG2R La Mondiale team at the top of the col de Vars to prepare for the final climb.

Bardet has made the most of this last mountain stage to dislodge the Colombian Rigoberto Uran in second place, three days of arrival in Paris. Clocked in at 23 seconds to Froome, he has probably secured his place on the final podium.

Uran, who has controlled the starts of successive of Bardet and also Froome at the entrance of the grand Casse desert, 2 km from the arrival, has been slightly dropped in the last few metres. It now occupies the third place in the provisional general classification, 29 seconds behind the yellow jersey.

“I’m glad,” responded Froome. “My teammates have done a very good job. I’ve tried going out, but it was impossible to outrun Rigoberto Uran and Romain Bardet. “

In the Izoard, which is transformed in race to coast giant-sized (14.1 km and 7.3 % slope), Barguil has attacked 7 km from the summit. At 1500 meters from the summit, he joined the last survivor of the early breakaway… 54 riders, the Colombian Darwin Atapuma, who had overwhelmed the Kazakh Alexey Lutsenko before the last 6 miles.

Atapuma, who wanted to honor the national holiday in his country, was let go under the flame rouge. But he managed to cross the line in front of Bardet and Froome.

The champion of Italy’s Fabio Aru, got it the day before at the top of the Galibier, has once again stuck. It has been stalled at 5 kilometers from the summit and fell from the 4th to the 5th place in the general classification, behind the Spanish of the Sky, Mikel Landa.

Friday, the Tour descends into the plain at the 19th step, long 222,5 kilometers, the longest of the trial, between Embrun and Salon-de-Provence.

But the decisive day for the order of the podium should be the next day, in Marseille, on the occasion of the trial of 22.5 kilometers.