Beauty gadgets of the future — from smart pant to scanner skin! 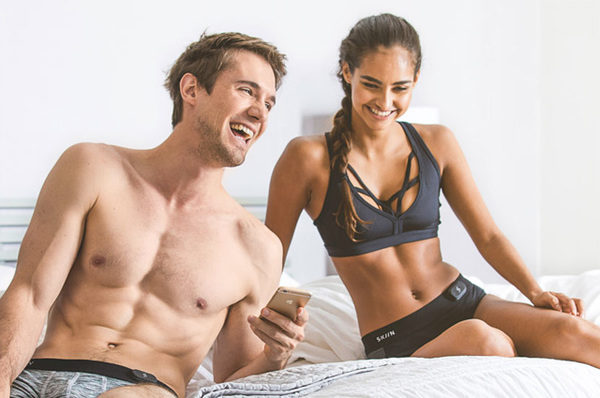 Beauty gadgets of the future — from smart pant to scanner skin!
January 12 in Las Vegas ended the CES-2018 — the world’s largest presentation of custom electronics,

January 12 in Las Vegas ended the CES-2018 — the world’s largest presentation of custom electronics, reports Rus.Media. Amazing gadgets were many: TV, which is able to roll into a tube; the smartphone becomes the CPU and at the same time trackpad laptop; smart column for the name Kevin, pretends you’re at home (although actually not). We chose five strange devices that promise to make the owner of beautiful and healthy (which is obviously better than Vice versa).

Most of the noise in the beauty industry has done a clever mask Foreo UFO. It works like this: put under the frame special cloth mask and start to drive the device in the face. At this time, the mask will glow red, green or blue light, to heat or cool the skin, depending on the program. Production masks will be engaged themselves Foreo: while the company showed only two (morning and evening), ten dollars for a pack of seven pieces.

Foreo UFO is scheduled to release in two form factors: low-end model will not be cold face and support some of the future masks. Now there is a Kickstarter campaign, during which gadget you can buy for a hundred dollars cheaper than the retail price. Although by the end of the fundraising month left, we gathered 50 times more than the planned amount. It’s time to order a new product (if you do the idea lights home LED therapy).

It is difficult to imagine a more close-to-body garment than lingerie. So it is not surprising that the authors Skiin decided to use it to accurately measure temperature, pulse, number of body perspiration and physical activity. All linen is calmly washable and sold in sets of four things — that you are worried about hygiene, while the measure of his life.

The creators promise that Skiin will become part of the smart house, offer to tighten up the thermostat if you’re cold or sweaty, would include slow music to get you going through, or will adjust the lighting according to your mood. Of course, Skiin comes with the program with all settings and collected data and information are collected through the wireless module the size of a credit card, which before washing just gets out of the waistband of underpants. Linen is already possible to pre-order the first kits promise to begin to circulate in the summer of 2018.

Neutrogina is not new in the market of smart beauty gadgets. LED facial mask appeared in the brand long before Foreo (and regularly falls into the collection of oddities in this genre). This year it was decided to take better care of the skin using consoles for your smartphone.

Skin360 — lens system and sensors, which allows to skin 30x magnification, to measure the level of moisture and a visual estimate of the pore size and wrinkles. The results are displayed in the special application here, it is supposed to monitor progress and to order the desired products. Taking care of yourself was more interesting, the program has a rating system where you can see the results other users or to compete with yourself yesterday.

Smart mirror HiMirror — beauty version most tablet computers. It is also ready to entertain you with music, news and weather even maintain a conversation (in HiMirror built-in support for voice assistant Amazon Oleksy). In General, behaves as colleagues in the movie — for example, “Secrets of the seven sisters” with William Defoe and noomi Rapace. Significant differences between the two. HiMirror equipped with light sources: they are able to simulate an office fluorescent lamp or diffuse daylight. And it says nasty things right in the face.

The whole point of the function “virtual beautician”. HiMirror able to take pictures of the person in front of him and to evaluate them: not enough moisture, too large bruises under the eyes, enlarged pores and so on. The idea is that it is necessary to order the missing cream or track your progress. But the Internet is already considered nanodimentional rude and his advice to change the concealer is too direct for a reasonable piece of plastic. The good news is that the regime’s uncompromising criticism can include only the owner HiMirror.

The development of l’oreal is devoted primarily to the areas where people are most susceptible to cancer due to excess ultraviolet radiation. A tiny sensor (it fits on the nail of the thumb) is expected to wear for two weeks — during which time he will gather enough information about what hazards you are exposed to every day. Depending on the results, advise sunscreen and appropriate level of SPF.

If the technology will be extended, l’oreal will get the complete data about the level of ultraviolet light in different regions of our planet and can relate them with the incidence of cancer and, therefore, to propose measures to combat it. So any buyer of such a sensor will take care not only about themselves but also humanity as a whole.

Sneakers did not get to CES, but still came to selection for the great idea. The fact that they recorded annual travel on the Berlin subway. The manufacturer promises that the turnstile himself believes it, when the owner of the sneaker going down at the station to climb over a map is not necessary.

Now adidas are in talks with London underground: if they succeed, the inhabitants of the British capital will be able to save money on travel — a pair of shoes will be cheaper, even annual travel. The difficulty is that the turnstiles will have to equip it with sensors. But to put Oyster on the inlet and outlet owners wonderful shoes don’t have to.