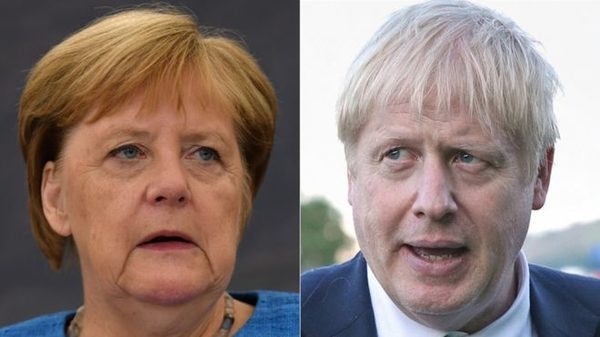 Boris Johnson will meet German Chancellor Angela Merkel in Berlin later, where he is expected to reiterate his call for the Irish border backstop plan to be scrapped.

The PM has said the arrangement to avoid a hard border after Brexit is “anti-democratic” and must be removed to secure a deal.

But the EU has rejected the possibility of any changes to the backstop.

Mr Johnson said the EU’s response to his demands was “a bit negative”.

However, he said he would enter Brexit talks with “a lot of oomph” and there was “a real sense that something needs to be done” with the backstop.

“We can’t get it through Parliament as it is,” he added.

The backstop is part of the withdrawal agreement negotiated between Brussels and former Prime Minister Theresa May, which has been rejected by Parliament three times.

Mr Johnson has vowed to do all he can to renegotiate the agreement, but has insisted the UK will leave on 31 October with or without a deal – “do or die,” as he put it.

Labour and other opposition parties, as well as a number of Conservative MPs, have vowed to do everything possible to prevent a no deal.

They say it would severely damage the economy and lead to widespread disruption to areas like travel and food supply.

Jeremy Corbyn has promised to bring a vote of no confidence in Mr Johnson as a means to do that, and some Tories have said they would rather bring down their own government than see no deal happen.

The BBC’s political correspondent Iain Watson said beyond his backstop demand, Mr Johnson would take a second key message to the German chancellor – “renegotiate now and don’t assume the anti-Brexit dissidents in the UK Parliament will find a way to block no deal.”

Speaking ahead of the meeting, Ms Merkel stressed that the backstop was a position of last resort and once “a practical solution” was found for the Irish border which allows trade and secures the Good Friday Agreement, it would not be needed.

She also indicated, though, there would be no change to the withdrawal agreement.

The military band at the German Chancellery is getting good at the British national anthem.

It is the second time in three years they’ve laid on full military honours for a new British prime minister.

Boris Johnson’s “do or die” rhetoric has alarmed and bemused Berlin, but Germany’s position hasn’t changed since Theresa May first arrived here seeking a Brexit deal for Britain.

The UK matters to Germany, but the integrity of the EU and its single market matter more.

Angela Merkel will no doubt serve up her Brexit red lines over the working dinner. The Irish backstop is one of them.

Prime Minister Johnson’s threat of a no-deal Brexit sends a shiver down the spine of German economists and industrialists, especially at a time of global economic uncertainty.

But even the business community here believe Germany and Europe must not put the unity and interests of the EU at risk simply to avoid the pain of such a scenario.

Mr Johnson’s meeting with the German chancellor is the first in a series of talks with EU leaders.

On Thursday, he will travel to Paris to meet French President Emmanuel Macron and on Saturday he will attend the G7 summit alongside other world leaders including US President Donald Trump.

Conservative MP and former minister Ed Vaizey said Mr Johnson was “hell-bent” on a no-deal Brexit and was “just going though the motions” in his attempts to talk to the EU.

Therefore, he told BBC Radio 4’s Today programme, the only way to avoid no deal was to find a way to persuade Parliament to back the existing deal.

Mr Vaizey added that the onus was now on “people like the Green Party, the Liberal Democrats and the Labour Party” who should support the withdrawal agreement if they genuinely want to avoid a no-deal Brexit.

In a letter to European Council President Donald Tusk on Monday, Mr Johnson said the backstop risked undermining the Northern Irish peace process and must be scrapped.

He called for “flexible and creative solutions” and “alternative arrangements” – based on technology – instead.

That demand was met with a wall of rejection from the EU.

The European Commission said Mr Johnson’s letter did not contain a “legally operational solution” to the Irish border issue.

Speaking to RTE, Ireland’s foreign affairs minister Simon Coveney said: “We are not going to abandon a solution that we know works for some kind of promise on the basis of trust…

“We are not in the business of being steam-rolled at the end of this because a British prime minister has rolled out new red lines.”

Mr Coveney also reiterated that Ireland would not do a bilateral deal with the UK, following a report in the Sun newspaper that Mr Johnson believed such an arrangement could replace the backstop.

The Irish border is a matter of great political, security and diplomatic sensitivity, and both the UK and EU agree that whatever happens after Brexit there should be no new physical checks or infrastructure at the frontier.

The backstop is a position of last resort to guarantee that, but if implemented, it would see Northern Ireland stay aligned to some rules of the EU single market.

It would also involve a temporary single customs territory, effectively keeping the whole of the UK in the EU customs union.

On Tuesday, the government has announced that British officials would stop attending most EU meetings from 1 September, only taking part in those where the UK has a “significant national interest”.

The Department for Exiting the European Union said it would “unshackle” them from discussions “about the future of the Union after the UK has left” and allow them to focus on “our immediate national priorities”.

But the SNP’s Fiona Hyslop expressed concern the move could leave Scotland and the UK unrepresented while it was still a member of the EU.

The government is also ramping up its preparations for no-deal, announcing it will automatically enrol UK firms in a customs system to enable them to continue trading with the EU after Brexit.

And the communities department has allocated £9m to councils in areas with key ports to help prepare for Brexit.

However, Labour called for ministers to “put businesses and the economy first, and rule out a no-deal Brexit”.

Shadow chief secretary to the Treasury Peter Dowd said the “panicked announcement” was “late in the day” for businesses and would “not come close to mitigating the disastrous effects a Tory no-deal Brexit will have on small business exporters”.