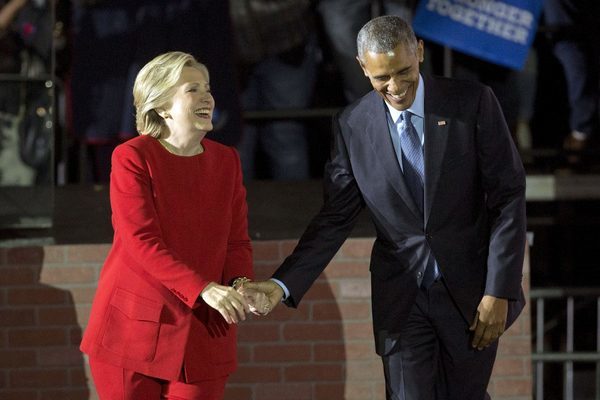 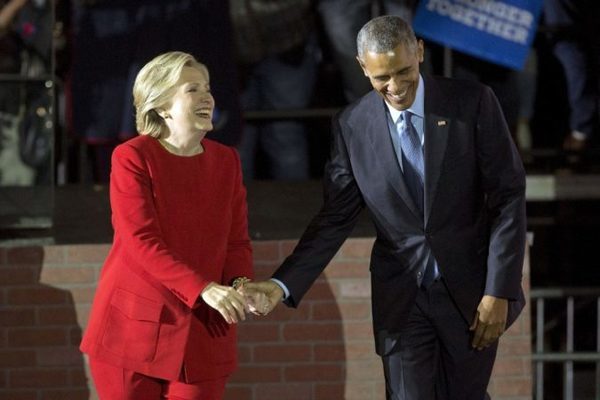 A few hours before the opening of US polls, Hillary Clinton took over Barack Obama during a big election rally in the city of Philadelphia. Michelle Obama, Bill Clinton and “Boss” Bruce Springsteen were also there to try to write a page of history.

“Tomorrow is the moment of truth,” said Hillary Clinton in the late evening, urging Democrats to vote in droves. “None of us wants to wake up and regret not having done more.”

Never in this campaign the former state secretary of 69 years was not expressed before such a large crowd, over 40 000 people who filled Independence Mall, to the foot of the building where in 1776 a group of Americans declared independence of the colonies.

Young, old, children, blacks and whites braved the cold, 2 degrees, to listen to this modest and stiff woman in public, more comfortable in black churches in the northern parts of the same city, when it was still Sunday on this monumental scene.

The other headliners have undeniably contributed to the success of this event, the end point of a Democratic campaign that has not generated much interest and who has known difficult moments and controversies.

After a singing tour of Jon Bon Jovi, the legendary Bruce Springsteen urged voters to put “the right side of history.” Between songs “Thunder Road” and “Dancing in the Dark” accompanying himself on acoustic guitar and harmonica, he praised the former first lady and her “real vision of an America where everyone counts “regardless of its origins.

His warm words and those of Barack and Michelle Obama laid the groundwork for the candidate, preceded on stage by the US president. As one of the organizers wink, the presidential seal was not removed from the console, contrary to custom.

“Hillary Clinton does not complain, she ignores. As Americans, it is strong and solid, “declaimed the incumbent. “Philadelphia, you have an exceptional person who to vote for in the person of Hillary Clinton.”

He is responsible for relegating by Donald Trump advance to the rank of bad memories, like Bruce Springsteen, who denounced the “lack of decency” of billionaire and promised that his ideas would be buried on Tuesday evening.

Clinton has struggled to achieve the eloquence of the man she wants to succeed, or his wife Michelle, delivering the same patriotic oration and it adopted for the final stretch.

Citing the threat of his Republican rival not to recognize the election results, it launched a challenge: “We will show tomorrow that the results of this election will be indisputable!”

After a hug Obama and Clinton families –Bill and Chelsea were also scène–, the candidate is a party to Raleigh (North Carolina) for his fourth and final meeting of the day.

Incidentally, this campaign has shown the choice of the world of “show business” for Democrats … And in Raleigh, the superstar Lady Gaga to sing during the midnight meeting.

His day began Monday around 10:00 at the regional airport of Westchester, near his home in Chappaqua, near New York. She arrived smiling and relaxed on a beautiful autumn morning, in conversation on her smartphone with her granddaughter two years, Charlotte.

A horde of journalists who accompany him, she gave the message it will repeat until the last minute, “I want to be the president of all those who voted for me and those who vote against me.”

“I have work to do to collect the country,” she also acknowledged, before boarding the Boeing 737, decorated with a “H” giant.

Then came Pittsburgh, before nearly 4,000 people outdoors on the University of Pittsburgh campus, in a neat setting, and she allowed herself a brief walkabout.

And 4 600 people near Grand Rapids, Michigan, a state that Democrats did not think having to defend against populist onslaught of Donald Trump.

“The country must come before party in this election,” she stressed.

The night will be short for the Democrat.

She has to go to sleep at home, where dozens of friends, supporters and members of his campaign team –des “insomniacs,” as she appelle– the welcome on the tarmac.

Over 3300 km in one day, after which he will have to perform an act: vote at dawn Tuesday at a school in Chappaqua.