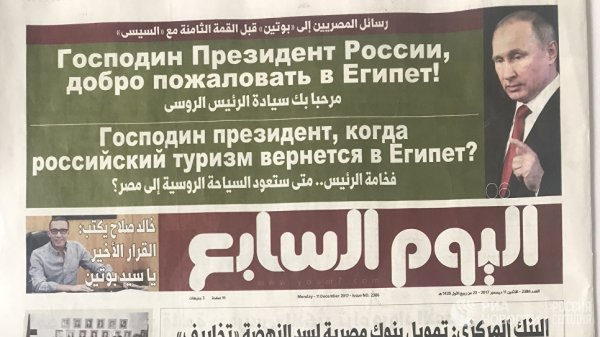 One of the most popular Egyptian Newspapers “al-Youm al-Sabia,” on Monday released the next issue with titles listed in Russian. Journalists turn to them to Vladimir Putin, welcoming him to Egypt and asking when the country will return to Russian tourism.

A big publication of the Putin’s visit to Cairo. Meeting with Egyptian leader Abdel Fattah al-Sisi will be the eighth in a row. The authors note that the official Cairo attaches great importance to negotiations between the presidents.

“This cooperation is particularly valuable in the energy sector and regarding the power plant project El-Dabaa, which will become a large joint venture in Moscow and Cairo. It is also important to discuss Russian investment in the oil and gas sector of Egypt’s economy. Tourism and military cooperation is not less important topic, “- says a source in the newspaper.

The article emphasizes the importance of the fact that the meeting between the two presidents is important for the entire Middle East, and if you take into account all the problems and conflicts that threaten the security of the region, it is not easy to overestimate.
The Kremlin noted that Putin and al-Sisi will discuss the issues of Russian-Egyptian relations in the fields of politics, economy, energy and humanitarian spheres.