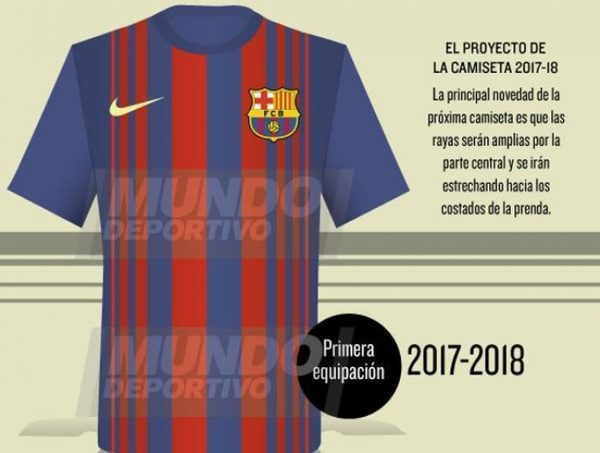 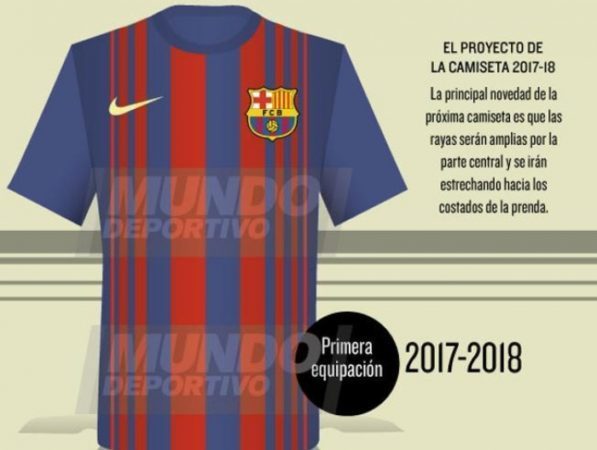 FC Barcelona’s jersey 2017-2018 is talked about by its design that leaks on the net. The Catalans must expect change.
FC Barcelona have the opportunity to reduce their gap somewhat with their rival Real Madrid – occupied by the Club World Cup this week – in the Spanish championship. The teammates of Lionel Messi have in this December 18 a capital match to play with the reception of Espanyol Barcelona at Camp Nou. An important derby that will have several stakes: the Catalan supremacy and the title race. Therefore, there is a good chance that we will attend a great deal. In the offices of Barça, the leaders have several files to deal with regarding the merchandising. The first on the shirt sponsor of FC Barcelona was settled. For the 2017-2018 outfit, discussions continue with Nike. However, the design of the home jersey has leaked in recent days and some changes are to be expected.

The 2017-2018 FC Barcelona jersey should look like this according to Mundo Deportivo
After leaks in exterior and Third jerseys, FC Barcelona has planned a home jersey with Barça irregular bands contrasting with those of this season, as you can see from above through the realization of the newspaper Mundo Deportivo . Sometimes thin, sometimes wide, the bands occupy the whole central part of the shirt on the front. For the reverse, nothing is said at the moment but we can think that the design will be repeated identically. The rest of the outfit remains in the classics. It will take a few months before Nike and FC Barcelona communicates on next season jerseys but this preview tells us more about the future of the textile Catalan club.