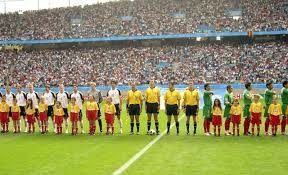 June 29 at 21:00 in Sochi at the stadium “Fisht” Germany in the semifinals of the Confederations Cup will play against the Mexican team.

Germany vs Mexico preview
The German team is approaching the semifinal match with a series of 13 unbeaten games, having won 10 wins and three draws. At the Russian tournament, an experimental, young squad Joachim Loew won her group, scoring 7 points with a goal difference of 7: 4. “Bundesmachina” defeated Australia 3: 2 and Cameroon 3: 1, plus played a 1: 1 draw.

Germany vs Mexico prediction
Mexicans do not lose for 6 fights, won 4 wins and twice tied. In the Confederations Cup, the Mexicans scored 7 points, scoring 6 and conceding 4 goals, losing first place in the quartet to the Portuguese only on goal difference. In Russia, the Mexican team played a 2: 2 draw with Portugal and defeated the New Zealand team 2: 1 and Russia 2: 1.

The history of meetings between Germany and Mexico has four matches. For the first time the teams played on June 6, 1978, and the last time on June 29, 2005, twice the teams played a tie in regular time, and two games were won by the Germans. I think that the upcoming match will be interesting and spectacular, two attacking young teams will play, well, World Champions will win in it. Bet: victory of the German national team – P1.