Gift on March 8: the business Elena Baturina made her richer by $ 200 million : In the World : Vladim 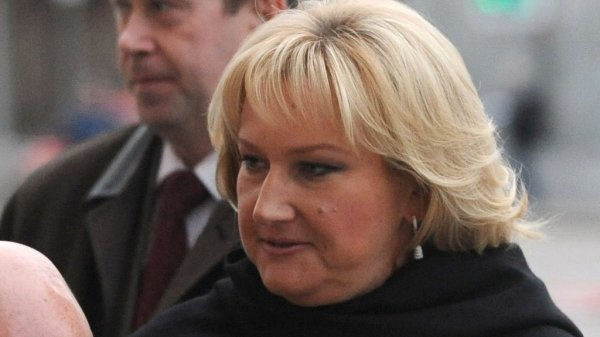 Big news for one of
main female: as published in early March last rating
Forbes returned to growth in the number of female billionaires in the world – from 227 to 256, and
the number belonging to them billion on 20%. Total “female”
state of the planet exceeds a trillion dollars, however, sorry to say
what all this trillion was earned by delicate feminine hands, you can
a quarter of women-in a billion are “self-made” whereas the overwhelming
most got their money in an inheritance or divorce.

Entrepreneurs who have earned their billions
on your own 72 – and that’s serious progress compared to last year
56.
The richest lady in the world is Alice Walton
a fortune of $46 billion (an increase of more than $12 billion per year). Only daughter
the founder of a chain Walmart is 16 rankings thanks to the growth
shares of the company. In the second place, the daughter and heiress of the last year’s leader
Liliane Bettencourt Francoise Meyers with a $42 billion – is the cost of its share in
perfume giant L’oreal. In third place is Susan Klatten her
25 billion inherited stake in BMW.
In fact, of the 10 richest women in the world 8
got inherited the wealth, two Australian Gina Rinehart (raw
business), and American Abigail Johnson (investments), though inherited
the family business was able to increase its value so much that he was in
the list of Forbes.
Russia in the women’s sector represented Forbes
just one name is Elena Baturina. Her condition over the past year increased by
$ 200 million to $1.2 billion; its position in the list rose
from 73 points to #1867.
For Baturina is the 13th year in a row in the status
the richest women of Russia, but on this record and titles is not the end: it
is the only entrepreneur in Eastern Europe, whose
fortune exceeds a billion and one independent
entrepreneur in the construction section of the Forbes list.
Recall that Yelena Baturina began
entrepreneurial activity in 1989 with the founding of the company, engaged in
production of computer programs. Her company “Inteko” at first engaged in the manufacture of
products made of plastic, and then entered the construction business, becoming subsequently
one of the largest companies in the country. A total of Yelena Baturina
was the head of “Inteko” for twenty years. Having sold almost all their
domestic assets in 2011, she moved the business to Europe. Now
time, writes Forbes, it implements itself in several business areas:
she owns a chain of hotels (Ireland, Austria, Czech Republic and Russia), the project
for the extraction of renewable energy (Italy and Greece), a company engaged in
membrane construction (Germany), development projects in the United States and the European Union.
It also invests in several real estate investment funds
involved in construction of residential and commercial property in the UK
and the United States.
According to the richest people
planet tradition, Yelena Baturina are also actively engaged in charitable
activities. Since 2012, operates its “creative and humanitarian” Fund BE
OPEN, which “supports talented representatives of the new generation through
a system of conferences, competitions, exhibitions, master classes, cultural
events, etc.”

Despite the impressive
the success of Baturina, it seems strange that Russia, where March 8 is one of
the most significant holidays of the year, for 13 years in a row can’t produce
the light of her company – for comparison, this year’s list of beautiful half
Forbes came from 42 new name, two-thirds of millionaires-entrepreneurs,
running their own business, are to the United States and China.