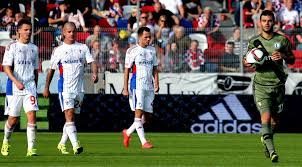 July 15 at 21:30 in Zabrze at the stadium named after Ernest Pol Gurnik Zabrze will accept Lehi in the starting round of the Polish championship 2017-18.

Gornik Zabrze vs Legia Warsaw preview
Gurnik Zabrze last season played in the second Polish division. At the end of the season in 34 rounds, gaining 58 points with goal difference 53-34 and took second place in the league. This success Gurnik achieved thanks to the finish jerk from 6 wins in a row with a total score of 18-4 and ahead of 5-6 teams at once in several points in the fight for promotion in the class. In the summer, Gurnik played three games, defeated Odra 5-0 and Karvin 4-0, and lost to Trshinetsu 0: 2.

Gornik Zabrze vs Legia Warsaw prediction
Legia has not lost in official matches since February 2017. Last season the team became the champion of Poland playing open football, scoring 70 and conceding 31 goals. In summer, the country’s champion won both friendly games, Plock 3-0 and Radomiak 260, but the country’s Super Cup lost Arce 1-1 and conceded in the penalty shootout.

Legia has not lost to Gournik since December 18, 2013, during 8 fights, winning 5 meetings and three draws. I think that the champion, in the game with the division’s newcomer, even on the road should take three points and start the championship with a major chord, the more the first trophy of the season, Lehi lost, and is eager for revenge. Bet: the victory of Legia – P2.