In China, followers of the “esports” hold their “training camp” 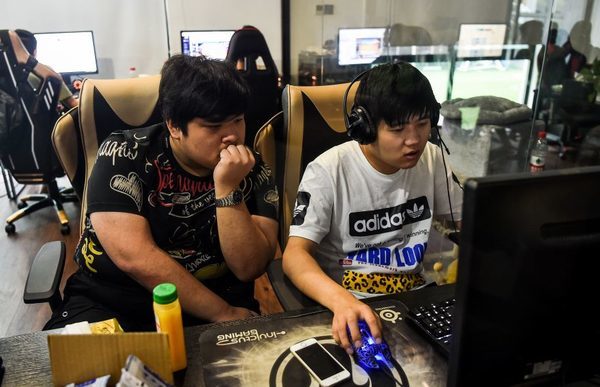 Photo: Chandan Khanna Agence France-Presse
The Flash Wolves heat up in Shanghai and require up to 16 hours of training per day.

Coffee and energy drinks at hand, extreme concentration… of The followers of “esports” train up to 16 hours a day in a dark room in Shanghai in anticipation of a tournament that can bring in more than 700 000 euros.

The professional team in taiwan’s ” Flash-Wolves “, one of the best on the planet, is preparing in the economic capital of china for the world Championships of League of Legends, a fighting game very popular the final of which takes place in early November in Beijing. The ambitious “training camp” of these young 18-to 22-year reflects the financial challenges and the extraordinary boom of esports, these video game competitions who dream to ultimately incorporate the olympic Games.

Each player Flash Wolves can expect to earn up to 60 000 euros per year, or more in the event of victory in a major competition.

“People think that our job is only to play video games. But this is not so simple, “stresses Yu Li-hong, a member of the team who calls himself” MMD “. “When it is your job, your state of mind when playing is totally different. You must be serious and pay attention to everything, ” says the young man 22 years of age.

The world’s best players are real stars and the major tournaments can bring together tens of thousands of spectators in the stadiums. And more via the Internet.

League of Legends is one of the most popular games of the eSport. Type ” arena of battle “, he sees them face teams in a fantasy world. The world final is organized on 4 November in the olympic Stadium in Beijing, the “bird’s Nest” of the olympic games-2008, which can accommodate 80,000 spectators. The team that wins the competition will be paid the equivalent of more than € 720,000.

In the meantime, the Flash Wolves heat up in Shanghai against local teams. And require up to 16 hours a day training, seven days a week. Dozens of cans of energy drink are stored in their local, coffee cups empty, littering the tables and some players to swallow of tablets of vitamin C.

This training aims to acquire reflexes and to optimize his knowledge of the game. But the reflexes of the human being deteriorate from the age of 25 years, resulting in pensions early in the eSport, explains ” 4Leaf “, the leader of the team. And the life of a player is ” very cruel “, according to him : if he aligns poor performance during a month, he is dismissed unceremoniously from the team, for the benefit of its liners. As a top-level athlete.

MMD left the university at the age of 19 years after having begun studies in tourism.

“In the beginning, my family was giving me thoughts every time I set up in front of my computer,” he says, wearing socks with a yellow and a pair of flip flops. “They wanted that I studied to get the best degree possible. But now, they support me, as long as it pleases me and that I do nothing wrong, like taking the drug. “

Just like MMD, his accomplice “SwordArt” looks frail and soft spoken. But armed with a computer mouse, it is a real killer. The player of 20 years, his real name Hu Shuo-chieh, keeps fit with food supplements, such as cod liver oil. And he didn’t seem too worried about the consequences of staying locked in the same room for days.

“For this to work, I spend most of my time in front of my screen and it is hard for the view. And I’m not much for physical exercise “, grant Hu, one of the only training camp, to not wear glasses. “For the moment, it hasn’t really had an impact [on my body]. Maybe because I’m still young. “