In China new build the longest glass bridge in the world 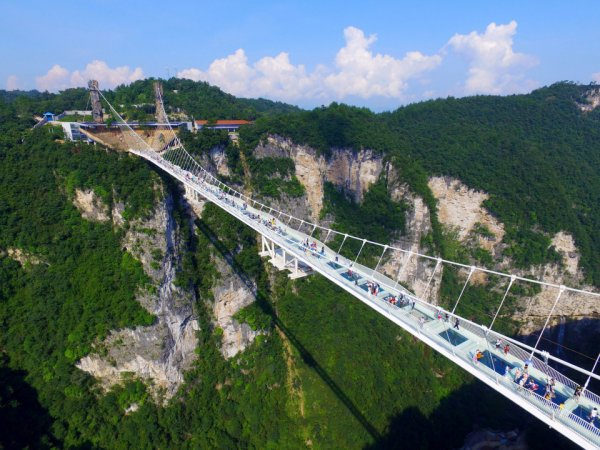 In the Chinese province of Hebei plans to build a new longest glass bridge in the world. Will open it for all visitors in the coming Sunday.

The length of the bridge, the location of the construction site which have chosen a very scenic area Junyaku, Shijiazhuang city, is 488 metres wide it is 2 meters.
According to the workers, the design consists of more than thousands of panels of glass, of a thickness more than four inches.

Stretch the bridge sufficiently extreme and those who are afraid of heights, his visit is not recommended. He hangs between two steep cliffs and stretched at a height of 218 meters. Design gross weight is 70 tons.

The bridge is designed in such a way that it slightly sways when visitors pass through its Central part. Despite the fact that the structure is able to withstand up to two thousand people on it, for reasons of security, at the same time can be no more than 500 people.

The construction, in total, took more than two years.
In recent years, China has been a real “epidemic” associated with the construction of the glass bridge. In particular, in the National Park of Zhangjiang, Hunan province, the local over the Grand Canyon, opened a glass bridge, which experts have called the world’s highest and longest.