In Syria collapsed, the Russian military built a bridge across the Euphrates In the World : Vladim 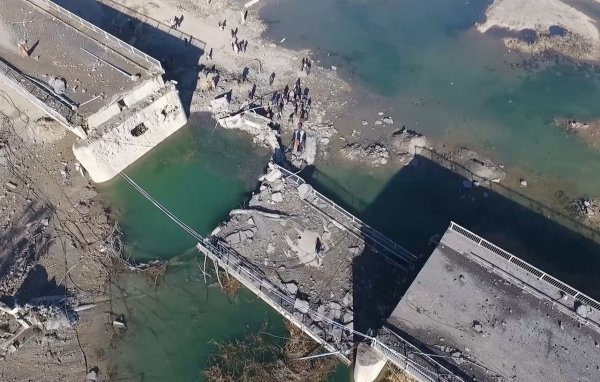 The bridge built across the Euphrates river in Syria, which had previously built military of the Russian Federation, collapsed and is not currently usable. Eyewitnesses reported that the bridge collapsed due to natural factors.

According to eyewitnesses, the water of the Euphrates river have risen significantly, and the flow velocity is increased about twice, from-for what the design of the 210-meter bridge was destroyed. Many experts were very surprised by such a sudden raise of the water level of the Euphrates, as in the past few days in the region was not observed precipitation of high intensity. As it turned out, the water level in the river, destroyed the bridge, built by the Russian military, has risen due to the discovery of some gate dam at al-Tabqa. Experts argue that opening the floodgates was a deliberate decision unidentified persons.

The bridge was erected in the vicinity of Deir ez-Zor for the transfer across the river to the specialized military armored vehicles and all personnel.