In the heart of Seoul, protesters burned flags of the DPRK and a photo of Kim Jong-UN : the World : Vladim 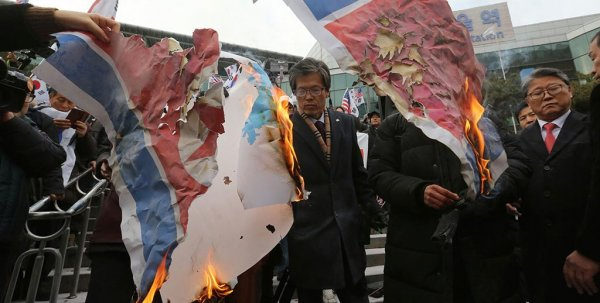 On the square near the station, Seoul a gathering of demonstrators burned flags of North Korea, as well as photographs of its leader Kim Jong-UN. Accordingly, the audience decided to Express their protest against the visit of the delegation from the DPRK.

The police decided to intervene and began to urgently extinguish the flames with fire extinguishers. Organized action was from the “Korean Patriotic party”. It is connected with the arrival in Seoul of cultural figures from Pyongyang. At the moment there is a coordination of tours the North Korean musicians.

“Olympics in Pyeongchang, in fact, should be the Pyongyang activities in order to spread propaganda, Kim Jong-UN to the whole world and justify the use of North Korean nuclear weapons“, – reads the statement made by the political organization.

It will be recalled that on January 9, representatives of the DPRK and South Korea were able to reach agreement about what the Olympics will be brought North Korean athletes, but also fans and musicians.