In the shops of Poland appeared “Hitler-socks” In the World : Vladim 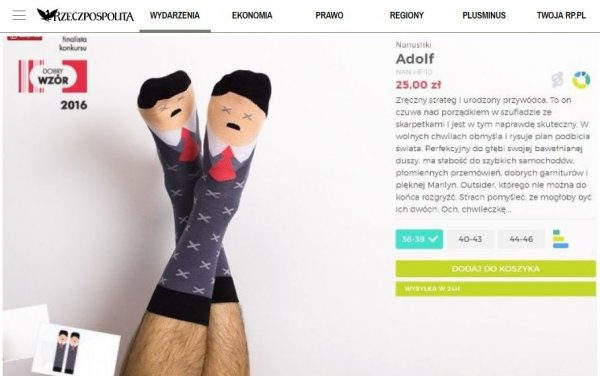 On the shelves of Polish shops, a new product, which immediately criticized the socks with the image of the world famous Fuhrer Adolf Hitler. A private company decided to earn additionally on behalf of the chief of the German criminal.

“Hitler-socks” released under the line “Adolf”. On the socks depicts the remarkable antennae and bangs of the Fuhrer. Manufacturer of Hitler’s socks Nanushki on your website metaphorically spoke about the main tasks of the jerseys – “to restore order in the sock drawer”.

The local Museum Auschwitz-Birkenau considered the idea disgusting. According to the Director of the Museum, Peter Tarnow, manufacturer of socks did not tactfully. The culprit is global conflict is unacceptable and inhuman.

Firm Nanushki expecting such a reaction from the public and saved a backup plan. The line “Adolf” they immediately renamed “Patrick”. Patrick is an ordinary office worker, like Hitler. “Hitler-socks” can be purchased for around 25 PLN.