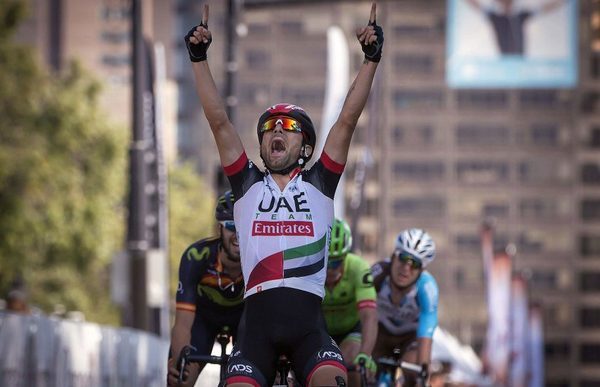 Photo: Peter McCabe, The canadian Press
Italian Diego Ulissi has left burst his joy at the arrival despite a victory on the wire.

Ulissi (UAE) has traveled to the event in montreal of 205,7 km in five hours, 22 minutes and 29 seconds. The cyclist, 28-year-old has signed one of the most beautiful successes of his career, marked so far by six stage wins in the Tour of Italy.

He took the lead in the order at the finish line, Jesus Herrada (Movistar) and Tom-Jelte Slagter (Cannondale). The favorites, including Sagan (Boh Bora) and Greg van Avermaet (BMC), have been trapped behind.

Sagan hoped to complete the sweep after having triumphed Friday in the Grand Prix cycliste de Québec, thus defending his title, acquired last year in the Old Capital. The Slovak tried to duplicate the feat of Simon Gerrans in 2014, when he became the first cyclist to win both races north american tour UCI World Tour in the same year.

Van Avermaet, the gold medalist at the olympic Games in Rio de Janeiro, was the reigning champion at the Grand Prix cycliste de Montreal. He had also finished second in Québec city last year.

The Grand Prix cycliste de Montréal is held in the same manner as in the previous editions, that is to say that a group of runaways — first Canadians Matteo Dal-Cin (Team Canada), and Benjamin Perry (Israel Cycling Academy) during the first 120 kilometers, then Ian Boswell (Sky) and Natnael Berhane (Dimension Data) during the 44 — escaped from the peloton before being gradually caught up, setting the table for the end of the wild race.

Many riders, Antoine Duchesne (Team Canada) and Guillaume Boivin (Israel Cycling Academy), then succeeded at the head of the peloton, without being able to stand out.

A group of six cyclists, which were part including Ulissi, Herreda and Bauke Mollema, was then detached on the last lap, and he was never able to be caught. Ulissi then crossed first the finish line of the race of 17 loops of 12.1 km around of mont Royal.

Duchesne at the head of the Canadian

Duchesne was the best canadian cyclist in the green of its 42nd position, 1 min 40 s of Ulissi. Friday, Boivin had been the best representative of the maple leaf flag by virtue of his 29th-place.

Their compatriots Jack Burke and Bruno Langlois were, respectively, finished 90th and 97th. The other representatives of the maple leaf Pier-André Côté, Alexander Cowan, Marc-Antoine Soucy, Ryan Anderson and Dal-Cin have been forced to retire.

The Grand Prix cycliste de Quebec will be back until at least 2018, while the Grand Prix cycliste de Montréal is secured until 2019. The organizer of these events since their birth in 2010, Serge Arsenault, had already expressed the wish to extend these long-term agreements, while hoping to add a third north american component — most likely in Boston or New York.

The Grands Prix cyclistes of Québec and Montréal serve as preparation for the world Championships of cycling on the road, Bergen, Norway, from 17 to 24 September.