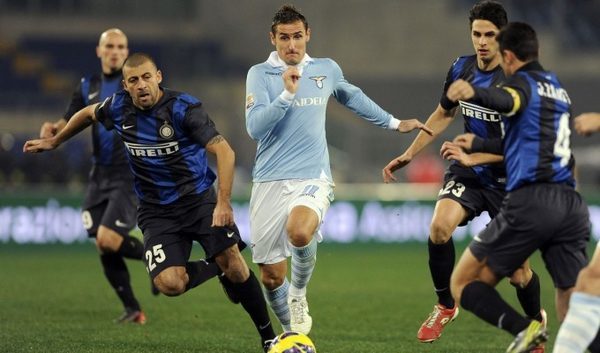 May 21, Sunday at 21:45, will be the central match of the 37th round of the Italian Serie A championship in which the stadium “Olimpico” in Rome, the local Lazio will play against Milan Inter Milan.

Lazio vs Inter Milan prediction
Having shown his character, as well as his best technical qualities, together with the competent work of the management team, the Roman Lazio conducted the current season with progress. For 2 rounds to the finish of the championship Lazio secured a ticket to the group stage of the Europa League. As for the results in the last rounds, so even despite the defeat in the last game with Fiorentina, in general Lazio looked very powerful and super-productive. Let me remind you that shortly before that Lazio beat Sampdoria 7: 3, Roma 1: 3 and Palermo 6: 2.

Lazio vs Inter Milan preview
Failing the beginning of the season, Inter began to correct the situation. Having given out a long series of matches without defeats, Inter for a while stayed in the number of the favorite and, it would seem, will no longer give up. However, having flown first from Lazio in the quarterfinals of the cup, immediately followed by a kick from Juventus, and the last victory over Atalanta 7: 1, as I have said many times, laid the beginning of the failures of the “blue and black”. So in the next 8 matches Inter earned only 2 points.

The rich history of the confrontation leaves many interesting matches in memory. Over the past few years, more victories remain on the side of Lazio. In this season, the team has already played twice with each other, while Inter in the first round match, in the duel for the quarterfinal of the Italian Cup, Lazio became stronger. Lazio plays at home, which by definition leaves an advantage. Lazio is in good shape and scores a lot, unlike Inter. And with such a form and a succession of failures, in Rome there is nothing to catch the Inter. Bid: n1