Martin Reway happy to be back on the ice 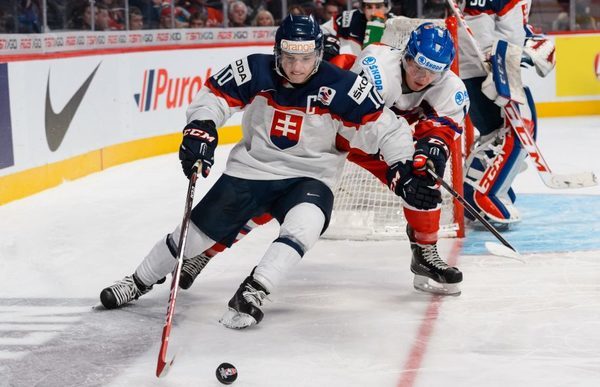 Photo: Minas Panagiotakis / Getty Images / Agence France-Presse
Martin Reway, since here the colours of the Czech team junior in 2015, is said to have made more than a year to recover fully from a virus.

Martin Reway was just satisfied to be on the ice with other hopes of Canada on the occasion of the opening of the recruit camp on Thursday.

The Slovak 22-year-old has missed a full season due to a heart problem, thus slowing down the progression of one of the most beautiful hopes of the Habs.

Reway has refused to discuss his health problem, but he indicated that it was a virus which had forced him to stay in the hospital for a month and he had put in more than a year to recover completely.

“After such a long absence, it’s good to be back, said the hockey player from five feet eight inches and 170 pounds. I know this will be difficult to find the rhythm, but I will work hard here in training to improve myself, and I hope that my progress will go as quickly as possible. “

The CH is also concerned to observe the effects of an absence of a season on the progression of Reway, who shined while leading Slovakia, yet neglected, to the conquest of the bronze medal at the world Championship junior hockey 2015.

He was drafted in the fourth round in 2013, having amassed 112 points in 90 parts spread out over two seasons with the Olympic of Gatineau, in the national hockey League the Quebec major junior. He then played for Sparta Prague, in the Czech Republic, and made a short stay in Fribourg, Switzerland, before falling ill.

The doctors detected the problem during a routine examination, a week prior to that Reway will leave for the camp of the recruits to the Canadian last summer.

“I wasn’t feeling well, so they kept me in observation, and they found a serious problem with my heart, so I had to rest, he explained. I did a lot of fever. It happened so quickly that I have not had time to react. “

“I couldn’t train me, or make of movement during the first three or four months. When you’re a hockey player, you realize that it is difficult to stop doing what you love. I had to rest a bit. But when you go back to the game, you get really excited, I think. “

On Thursday, it has not weathered at bottom of train, but has mentioned that his physical form would come back gradually. He will probably take part in the real camp, the next week. The chances are slim that it sits within the team of the NHL this season, which means that it should start the campaign with the club-school of the american hockey league (AHL), who will play their first season in the suburb of Laval.

“I was surprised by the quality of my puck handling, he recognized. Obviously, my legs and my cardio were not at the rendezvous, but it is understandable after a one-year absence. “

Reway was part of the 23 hopefuls invited to the camp. They leave Friday to participate in a tournament of recruits in Toronto against the hopes of the Maple Leafs and Ottawa Senators.

Among the players who will to watch are goalkeeper Michael McNiven, defenders Noah Juulsen, Simon Bourque and Victor Mete as well as forwards William Bitten and Jeremiah Addison.