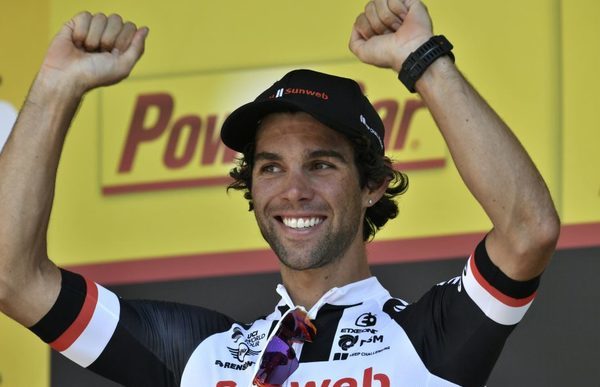 Matthews concluded the work of his team during a good part of this stage of 165 km conducted at a brisk pace, more than 45 km/h.

The Australian Michael Matthews (Sunweb) narrowly won the 16th stage of the Tour de France, Tuesday, in the Romans-sur-Isère, after a final very tight in the wind.

The British Chris Froome (Sky) retained the leader’s yellow jersey on the eve of the first big mountain stage in the alps, the Galibier.

Matthews won for the second time since the start after his success of Rodez on Saturday.

The sprint, very tight, is played between Matthews and two other riders, the Norwegian Edvald Boasson Hagen, already beaten with few in the first week (by Marcel Kittel at Nuis St. Georges), and the German John Degenkolb.

Matthews, who was close to the German Marcel Kittel in the points classification (green jersey), has concluded the work of his team during a good part of this stage of 165 km conducted at a brisk pace, more than 45 km/h.

The pace of the men of Matthews has distanced Kittel, winner of five stages in this Tour, shortly after the departure of le Puy-en-Velay.

The holder of the green jersey, within a second group, was not able to get back on the main pack. Unlike the French Nacer Bouhanni, who counter-attacked to return, with the help of teammates, before arriving in the valley of the Rhone.

In the final, very windy, under a strong heat (33 degrees), the team of Froome has caused several breaks, the main 15 kilometres from the finish. The Irish Dan Martin and the South African Louis Meintjes were the main victims.

The French Romain Bardet, third of the Tour, is just managing to go back, with the help of the champion of Belgium Oliver Naesen, determining in the circumstances.

Dan Martin, who dropped a fifty seconds, has retreated from the 5th to the 7th place in the general classification, just over two minutes to Froome.

The winner of the last Tour of Flanders, the Belgian Philippe Gilbert, ill (gastro-enteritis), did not start the race. The new Zealander George Bennett, who occupied the 12th place in the standings, dropped out in the first part of the course.

On Wednesday, the 17th step, long, 183 miles between The Mure and Serre-Chevalier, attack with two passes out of class, the Croix-de-Fer (2067 m) and in particular the Galibier (2642) climbed by its north face, the most terrible. The arrival is judged after a long descent of 28 kilometers.