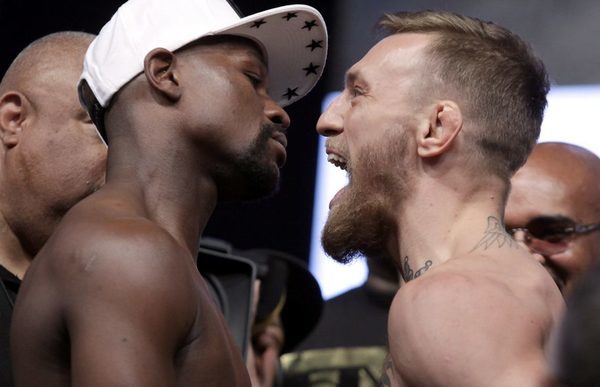 After the provocations, insults and other controversies, Floyd Money Mayweather, and Conor The Notorious McGregor will finally square off Saturday night in Las Vegas to win a jackpot without precedent in the history of boxing and sports-entertainment.

Fans of combat sports of the whole world have their eyes glued to the sultry capital of the world of the game and casinos which will take place from 21: 00 local the most unlikely of duels, between the one of the best boxers in history and a star of mixed martial arts (MMA).

Friday during the traditional weigh-in, for their last meeting before you find the ring of the T-Mobile Arena, Mayweather and McGregor have remained faithful to the roles they have endorsed since their fight has been finalized in June.

To McGregor, the challenge : to 29 years, the former apprentice plumber a rough neighbourhood of Dublin, who survived there are still four years with unemployment benefits, has once again amused the old age of his opponent (40 years).

“I had never seen him in as bad physical shape, I’m going to crush it “, he assured for the greatest pleasure of a sea of green of irish spectators.

Mayweather replied with his usual arrogance : “You are not going to go the distance, I’m not worried,” insisted the self-proclaimed The Best Ever (the best ever).

The duel that will take place according to the rules of English boxing in twelve times, is a priori very unbalanced.

McGregor will make his debut on a ring in the face of a boxer who has never lost since his professional debut (49 wins, 26 by KO) and who, if not spectacular, is one of the best defenders and contreurs of the story.

The purists of the sport of boxing continue to present this fight as a spectacle or a farce : “It is as if we wondered if a player of ping-pong had a chance to beat Roger Federer in a tennis match,” says Teddy Atlas, a boxing trainer respected.

Worse, some are beginning to worry about the physical integrity of McGregor, as british boxer Amir Khan, who directed ” not to prolong too long it starts to take a beating “.

The president of the Association of physicians of boxing, Larry Lovelace, went further in finding that the sports commission of Nevada would not have had to allow this fight : “What I fear, really, is that someone is seriously wounded,” he explained to the New York Times.

But McGregor and Mayweather are long gone in another dimension.

The Irishman, winner of 21 of his 24 MMA fights where he can use his elbows and knees, is guaranteed the biggest cheque of his career, $ 70 million at a minimum, 100 or 150 million according to the forecasts of the most crazy, while Mayweather, released for the occasion of his retirement golden outlet 2015, could win 250 million dollars!!!

In the absence of the ” fight of the century “, and its proponents have put up the Money Fight, literally, the fight of the money, that will beat, in front of 20 000 spectators and a billion tv viewers across the world, all of the records.

The revenues from the TV rights (you will need to spend 99,99 $ in the United States to follow the fight on tv), contracts, sponsorship and ticketing, are expected to surpass the $ 700 million generated in 2015 by the “fight of the century” between Mayweather and Manny Pacquiao.

The makers of paris will rub also hands : never a boxing match will have generated as much of paris, to the point of being closer to the magnitude of the Super Bowl, the final Championship of american football, the most important event of the sporting calendar in the United States.

It does lack more to this show than a final unlikely, a victory of the underdog against the favorite, which would make it one of the biggest surprises in the history of the sport.

“When two men find themselves face-to-face on a ring, everything is possible “, wants to believe Dana White, the promoter of McGregor.