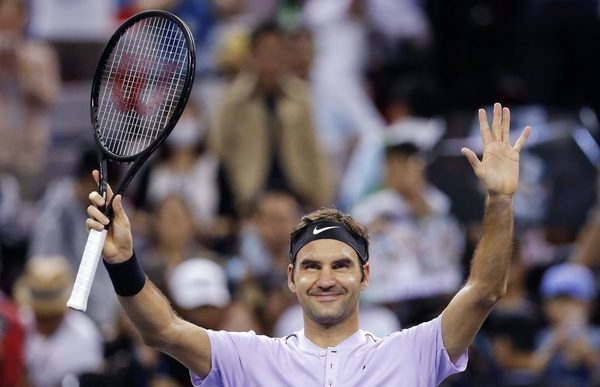 Photo: Andy Wong, Associated Press
Rafael Nadal and Roger Federer (on the photo) are both in the race to finish the season in first place of the world.

Shanghai — Rafael Nadal and Roger Federer entered the third round of the Masters in Shanghai without too much pain.

Spanish, a favorite of the competition, has lost only four exchanges in the service, en route to a victory of 6-2, 6-1 at the expense of Jared Donaldson.

The Swiss, second seeded, defeated Diego Schwartzman 7-6 (4), 6-4, winning the duel on his 14th ace on his second match ball.

Nadal and Federer are both in the race to finish the season in first place of the world, although only the Spanish can confirm this honor this week, if he wins for the first time in the tournament and Federer is eliminated before the semi-finals.

Earlier, Alexander Zverev has needed only 13 minutes to go in the next round. The German, ranked third, was leading 4-0 when Aljaz Bedene retired because of an injury to a knee.

The sixth-seeded, Grigor Dimitrov, has also reached the next round. The Bulgarian, however, has had to save three match balls before defeating Ryan Harrison 3-6, 6-3, 7-6 (6).

Harrison, 46th racket world, was leading 4-2 in the third set and 6-3 in the tiebreaker, but Dimitrov has won the last five exchanges to win.

Among the other winners of the day include Gilles Simon, Sam Querrey and John Isner.

In addition, the ATP has imposed on Wednesday a fine of 31 085 US $to the Australian Nick Kyrgios for having left her match the day before.

The 13th-seeded has just left the court after having escaped the first set in the face of Steve Johnson 7-6 (5).

He was fined 21 085 $ — the grant of the first round — for having refused to see a doctor after the match as stipulated in the rules of the circuit in case of injury. He has been sentenced to 10 000 $ extra for unsportsmanlike conduct.

He had also been sanctioned in the meeting for abusive language.

Several hours after his gesture of brilliance, Kyrgios used the social networks to say that he was shot in the shoulder and suffered from stomach aches.

Kyrgios is also removed from the table the double.