New weapons between Trump and the NFL on the national anthem 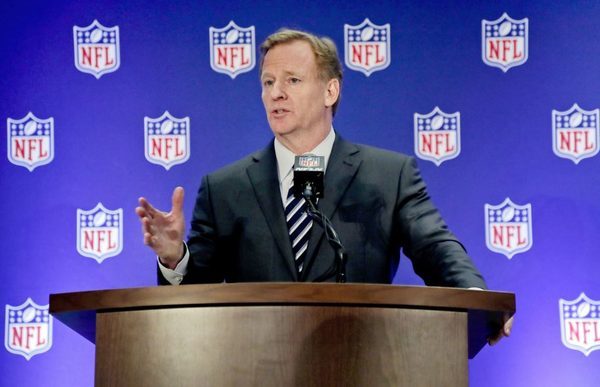 Washington — The boss of the NFL, Roger Goodell, said on Wednesday that the players of professional league of american football should be standing up during the national anthem, without turning it into an obligation as required by the president, Donald Trump.

“The NFL has decided that she would force no players to stand up for our national anthem. Total lack of respect to our great country ! ” wrote Mr. Trump in a tweet early in the morning.

This new attack, the american president against the NFL comes after a meeting between the owners of the clubs and the player representatives on Tuesday and Wednesday in New York.

No decision has been taken during this meeting on the thorny issue of the protests of the players during the national anthem, which divides the world of sports and american society the past several weeks.

In a joint statement, the NFL and the union have ensured that ” every member of the community NFL has a huge respect for our country, our flag, our anthem and our soldiers “.

“We believe that players should stand during the national anthem “, said the commissioner of the NFL Roger Goodell at a press conference.

“We want our players to be standing and we will continue to encourage them to get up,” he said, adding that the members of the meeting had not discussed any possible sanctions against players knelt. “I can’t talk about hypothesis,” he responded to a question about the penalties.

“It is important for us to honor our flag and our country, and this is what the supporters expect from us,” he recalled, noting that the players who protest in this way ” don’t do it to disrespect the flag “.

He assured that the NFL did not want to ” not do politics “, considering that the topics of protest were ” complex “. And is said to be sensitive to the protests of the players that ” speak of a reform of the judicial system, guarantees, penalties floor “.

For almost a month, the american president is engaged in a standoff with the NFL players posing a knee on the ground during the national anthem. This gesture controversial, made to denounce the police brutality against African-Americans, racial tensions in the United States and sometimes the american president himself, is interpreted by Donald Trump as a lack of respect for America.

Mr. Trump on Monday called the NFL to suspend the players who kneel during the hymn. The rules of the league says that players “should” stand up during the Star-Spangled Banner, but does not make this mandatory.

On Tuesday, Mr. Goodell indicated that the league had not asked the players to stand up during the anthem.