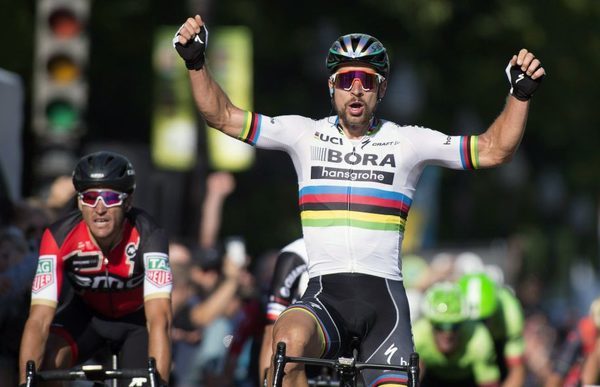 Photo: Jacques Boissinot The canadian Press
For the Slovak, it was his 100th career win.

Winner of the Grand Prix cycliste de Québec in 2016, the Slovak Peter Sagan (Bora) has repeated the feat on Friday using the same recipe to come up in first position at the end of the final sprint.

For Sagan, it was his 100th career win. Satisfied with this achievement, one of the darlings of the quebec public was allowed to always be as hungry.

“This is [an outcome] that is quite similar to last year. I decided, at about the same time, that it was time to go “, has just explained the double world champion, known for his jokes and his wry smile.

For Van Avermaet, the scenario is also repeated. The gold medalist at the olympic Games in Rio de Janeiro in 2016 was also content with the second place last year in Quebec city. It was resumed two days later at Montreal in the earlier, ahead of Sagan.

“I’m a little disappointed, but Peter [Sagan] was once again stronger than me, he admitted. I hope it will be better to go Sunday and I’m going to win. “

The Grand Prix cycliste de Québec took place as the seven previous editions, that is to say that a group of runaways escaped from the peloton before being slowly joined by the latter. It has been impossible to identify the winner before the final sprint that crowned the course of 16 laps, a total distance of 201,6 km.

For his part, Matthews was delighted to get on the last step of the podium, who had crossed the finish line at the fifth level 12 months earlier in the walled city.

In 2014, Simon Gerrans has made history by becoming the first cyclist to win both events in the same year. On Sunday, Peter Sagan will attempt to become just the second rider to get there.

Side anime the show

Pier-André Côté (Team Canada) has surprised many people by inviting among the runaways in the company of Tyler Williams (Israel Cycling Academy), Tosh Van der Sande (Lotto Soudal) and Baptiste Planckaert (Katusha-Alpecin). With 60 km to go, fatigue had taken hold of the Side, so that it was dropped by the trio. In the 11th round, the native of Lévis was forced to surrender.

“Even if I wasn’t able to finish the race, I am glad I have given everything “, has launched the athlete of 20 years.

For a second year in a row, Guillaume Boivin (Israel Cycling Academy) was the top Canadian of the day, finishing 29th. “I am a little disappointed in my performance. I have not delivered the goods. I think that the form was there, but I lacked a little energy in the last 300 meters. I did what I could, ” said Montreal’s 28-year-old.

The Québécois Bruno Langlois and Antoine Duchesne, respectively, have recorded the 52nd and 59th positions.

The representatives of the maple leaf flag Jack Burke, Ryan Anderson, Matteo Dal-Cin were finished 77th, 99th and 107th on the 160 registered riders.

Like, Canadians Alexander Cowan and Marc-Antoine Soucy have not been able to finish the race.

At the right middle of the race, the organizer, Serge Arsenault, has expressed his desire to extend long-term agreement with Grands Prix cyclistes of Québec and Montréal. In the same breath he clarified that the negotiations were not commenced, but that he would like to sign up, ” until 2160 “, he extrapolated.

His interest to add a third test to the event is well-known. New York and Boston are in all likelihood to be two cities potential.