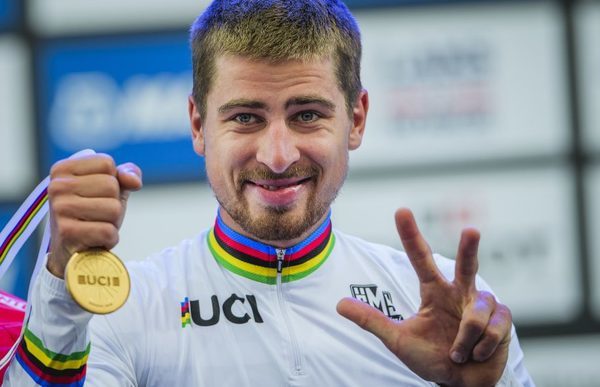 Bergen (Norway), Peter Sagan, discreet during the whole race, has popped up in the nick of time on Sunday to Bergen to remove his third world championship title in three years, a performance unprecedented in cycling, at the end of a race inflamed conducted by the French Julian Alaphilippe.

“In the last five kilometres, I thought it was lost,” admitted the Slovakian. But Alaphilippe and his companion escaped, the Italian Gianni Moscon, were joined at 1500 metres from the line, without the television, the reduced its fixed cameras, can transmit these moments to the major race of the year.

Sagan, who had not shown hitherto to the length of 267 kilometers, has recovered in extremis the Norwegian Alexander Kristoff as he took the lead of a half-wheel. The Australian Michael Matthews took third place, his second podium after his second place in 2015 in Richmond (United States) at the first title of the Slovak.

As expected, the example of the tactic followed in the past year in the sands of Doha (Qatar), Sagan referred to the other national selections, without being able to rely on a national team strong (six riders for Slovakia against nine strong nations). Successful bet, since no breakaway has managed to go to the end. No more the group formed at the initiative of the Belgian Tim Wellens 65 kilometres from the finish as the duo Alaphilippe-Moscon in the last eleven laps of the circuit.

By his attack sharp on the final climb of the côte de Salmon Hill, 11 km from the line, Alaphilippe was long seen as a winner in power. “I really felt I gave all I had,” said the punch French, very disappointed at the finish (10th).

Passed close to the feat at the games in Rio (4th after a fall), Alaphilippe has distanced Moscon on the cobblestones of a false flat amount to 4500 meters. Second by second, the young Italian (23 years old), very prominent in the spring classics, has whittled away his delay to return on the French to 2 kilometers. “From there, the carrots were cooked “, regretted Cyrille Guimard, the new French breeder. “Moscon was not going to roll “.

The back of the pack, the 1500 metres, has been drummed into the cards and, in this game, Sagan was drawn once again to the right number. At the conclusion of a season that saw him fail in the major appointments, and to lose his green jersey of the Tour de France, after his exclusion for sprint dangerous.

“It’s a terrific year,” responded the triple world champion whose wife is expecting their first child. He had previously dedicated the title to Italian rider Michele Scarponi who died accidentally in April : “I think very highly of him. “

The coronation of Bergen to reach the top four riders (the Italian Alfredo Binda, the Belgians Rik Van Steenbergen and Eddy Merckx, Spaniard Oscar Freire), which count three successes in the race rainbow. But it is the only one to have won three times in a row.

At the age of 27, the Slovak that accommodates most golf courses, is poised to add one or more shirts, iridescent in its collection. On a short term or medium… The circuit of Innsbrück, the austrian city which will host the World 2018, seems to play against him, with some 5000 metres of difference in altitude.