Philippine Mayon volcano woke up and started spewing lava In the World : Vladim 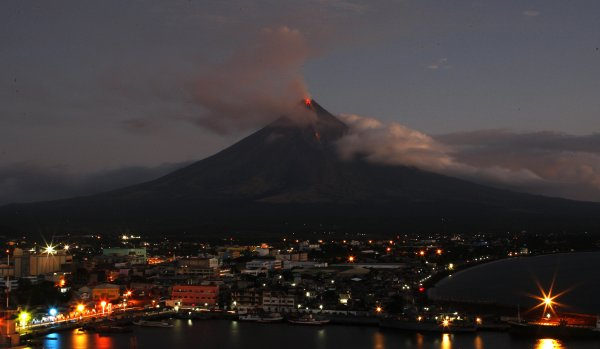 The Philippines has once again awakened Mayon volcano. For several days it spews lava. More than 30 thousand residents were evacuated.

The inhabitants of the province of Albay, located in the Philippines, faced serious difficulties. Monday Mayon volcano, located near the settlements began its eruption.

A few hours had to occur before 9 earthquakes. While the volcano is active, but no serious incidents occurred. Several times he spewed large particles of molten rocks, several tons of smoke and a bit of magma.

The current situation did not bring casualties. Scientists and authorities are asking people to observe safety precautions. Those who still have to live near an active volcano, you need to breathe through a special bandage. Without superfluous need not to leave the house and not be in the 6-kilometer zone from the eruption.

Nearest settlements, near Mayon were evacuated about 30 thousand inhabitants. Some of them voluntarily ran away from the danger zone.

Last time the volcano erupted in may 2013. Then killed five climbers who were on the Mayon.