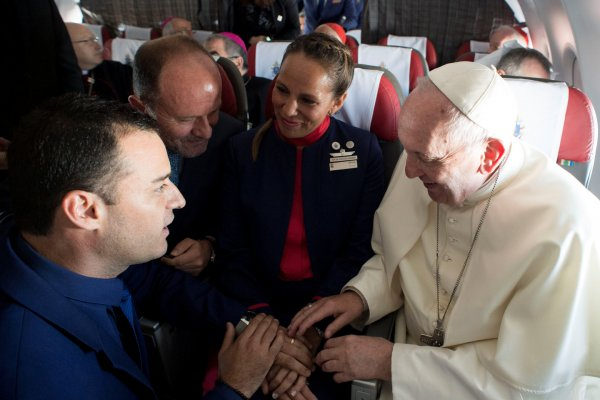 A rather unusual wedding gave himself a couple of stewardesses and a steward. The thing is that they learned that aboard the plane during a flight between the Chilean cities of Santiago and Iquique was attended by the head of the Catholic Church Pope Francis, humble lovers who asked them to marry right in the plane.

The pair approached the Pope during the flight. They said that married for several years, but was never able to marry, because the Church in their hometown was destroyed, because get married they never came out.
Dad, upon hearing their story, offered to hold the wedding ceremony directly on Board the aircraft. The couple immediately agreed.

Marriage certificate, which was made in the Catholic rite, they issued available on the official letterhead of the airline carrying out the flight.
Later in the vast Twitter there was a picture published by the priest Antonio J. spadaro, who met, who accompanied the Pope.