Project Atlantropa: how to drain the Mediterranean sea and why is it necessary 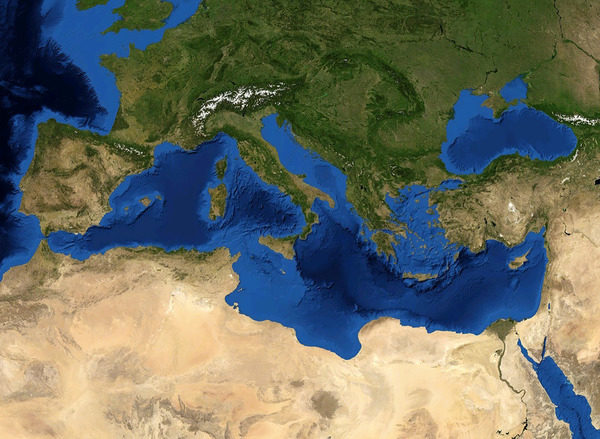 The Mediterranean sea separates Europe and Africa, was not always so, as we know it. About 6 million years ago, in the Miocene, the sea a few times lost the connection with the Atlantic ocean and was isolated pond. The rivers flowing into it could not complete evaporation, and it is partially or even almost completely dried up. Also Sugar, the biggest on the planet hot desert wasn’t always like this. Where to horizon stretch the hot Sands, about 6 thousand years ago there was a green Savannah, reports Rus.Media.

German architect and philosopher Hermann Sergel inspired the creation of some truly fantastic project – the unification of Europe and Africa by draining the Mediterranean sea.

The first version of the project appeared almost 90 years ago, in 1927. At first the project was called Panwapa.

Details of the project

Sergel supposed to block with one dam the Strait of Gibraltar and thereby protect the sea from the Atlantic ocean, and the other dam to block the Strait of the Dardanelles. One of the options suggested to combine dam Sicily (until joined with the “Italian boot”) and Africa than to cut the sea in half. The Mediterranean sea would have been an isolated pond. As a result of evaporation, its level would decline by about 100 meters. By the way, the water level on the Earth’s largest closed body of water – the Caspian sea – only by 27.16 meters below the sea level (the surface of the oceans). While the same closed from the World ocean waters of the reservoir were to become marble, Black and Azov seas. It was assumed that the area of the Mediterranean sea should have been reduced by 20%.

The receded water of the Mediterranean sea had to leave behind 600 thousand square kilometers, which is almost like two Italy. Exposed, don’t belong to anyone of virgin land would be for the benefit of all European Nations.

Tehnoutopiya as an alternative to war

Appeared in a short break between the two world wars, the project could not be better personified an alternative to the future that still waited for Europe.

Instead of trekking to the East for the conquest of living space Sergel the proposed hike to the South. I had to fight with Nature, not with the peoples on the Eastern borders of Europe.

However, the people of Africa Sergel in the calculation did not take. Until the “year of Africa” when most of the colonies on the continent gained independence, there were still a few decades.

United States of Africa and Europe

The idea of a United States of Europe was in the air since the creation of the United States of America and the French revolution. She was obsessed with Napoleon Bonaparte and Victor Hugo, Leon Trotsky, and many other thinkers, generals and revolutionaries. The architect Hermann Serges was one of the varieties of implementation of this idea in life.

The project of creating Atlantropa was not only a changing nature. It was a political project, whose goal was the creation of a United States of Africa and Europe with the capital in the revived Carthage.

As already mentioned, the project of Atlantropa did not take into account the interests of the indigenous population of the African continent. But Africans were hardly aware of the ambitious plans of the genius architect. But in Europe the plans for the draining of the Mediterranean sea have been widely discussed. Especially were outraged by the inhabitants of southern Europe. The draining of the Mediterranean sea completely changed the way it is inextricably linked with the sea life. Only thirty years took to the sea has receded from the southern coastal cities. The city, whose residents could not imagine themselves without the sea, Dubrovnik and Malaga, nice and Genoa and many others were just “stranded”. Only for Venice, the city world famous for its Islands, canals and medieval Gothic architecture, an exception was made. A diversion channel with a length of several hundred kilometers had to return to the city went far to the South sea.

But European intellectuals have seen the ideal city of the future in the new lands. The work involved many famous architects of that time. New free territories allowed to realize a truly fantastic architectural ideas. The space of the city with wide avenues, ports, channels and bridges – a whole new world.

Do not leave Sergel your dream until the last day. December 4, 1952 on the way to a lecture about the Ufa he was hit by a motorist, who was never found. After a few days he was gone. And along with it, and it was not brilliant and at the same time is an insane idea.