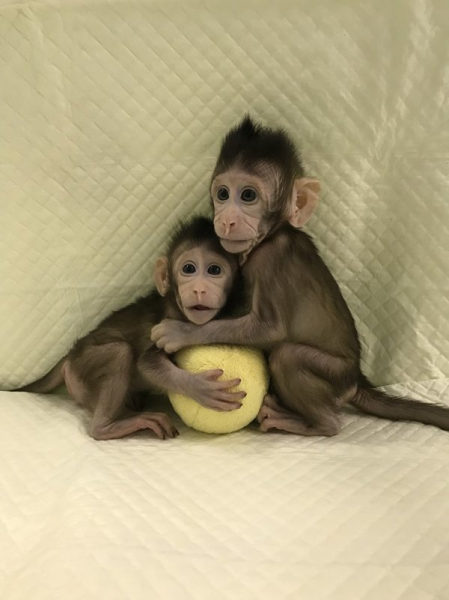 Scientists have cloned monkeys, like Dolly the sheep
Chinese researchers were the first who managed to clone monkeys, using the method applied in the case of the famous sheep Dolly. This event, as you might expect, generated a number of ethical issues.

This is not the first case of cloning monkeys, reports Rus.Media. But previously used a method other than that used in the case of the famous sheep Dolly. Zaplanina the embryo has already divided into parts, with the result that the light eventually appears multiple genetically identical primates.

In the case of Dolly it was different. Here the scientists used the transfer of genetic information, which is taken from the somatic cell into the egg. That is, in the framework of nuclear transfer of somatic cells or SCNT, refers to the “design” of the embryo from oocytes and somatic cells. First remove the genetic material, placing it in the cytoplasm, the nucleus of somatic cells. This method allowed us to clone mice, cows, pigs and other creatures. But with the monkeys, there is not a single clone to create it.

Now the Chinese have perfected the “Dolly method” especially for macaques. Scientists have succeeded, using epigenetic modulators that are applied after transfer of nuclei of somatic cells, which were resistant to SCNT. The researchers activated or deserted some genes that affect development of the embryo. The best choice for the experiment were fibroblasts-connective tissue cells of the body. They took the Bud.

The results can be called quite successful, and even in some sense revolutionary. 109 embryos developed 127 eggs. Of the total number of embryos 21 79 hoisted a surrogate mother, six of whom became pregnant. Eventually the light appeared two live young. The researchers themselves referred to as SCNT is a very complex procedure requiring high training. However, new technologies and experiences, as suggested by the researchers, may help in conducting these experiments.

The Chinese received results has spawned a new round of debate about the ethical side of the question. Most theologians concerned about the ability to clone a human. The Vatican has already called the cloning experiments of the apes “this attack on the future of humanity” due to their similarities with Homo sapiens. However, the fact of conducting such experiments in various animals (monkeys) is in the Catholic Church rather mixed reactions.