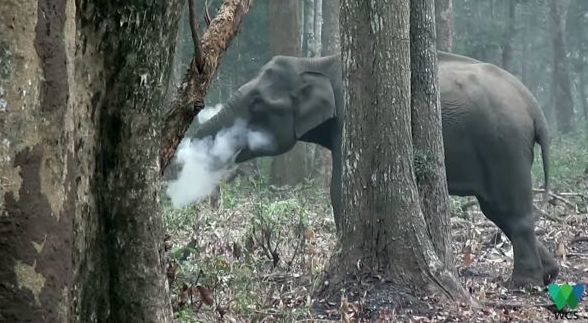 Watching animals, scientists have concluded that the female collects the pieces of burning charcoal, but attempts to cool him led to the formation of a very unusual animal and harmful to humans habits.

Animals are so firmly entrenched in everyday life that began to take over some abilities that were previously characteristic only of the people. However, the elephant that got on the record with surveillance cameras in the forests of India, have surprised even biologists, because he decided to join quite harmful to human occupation — Smoking, reports Rus.Media.

The animal stood near the trail and went through the trunk the grass. It seemed that the elephant decided to eat. But then with the trunk she sent to her mouth that lifted up from the earth, and scientists have had some doubts about her classes, as escaped from the jaws of the animal, a huge puff of smoke. After the first portion, the elephant as if nothing had happened he lowered the trunk into the grass and continued his studies.

Video with elephant-smoker has published on its YouTube channel, the wildlife conservation Society (WCS).