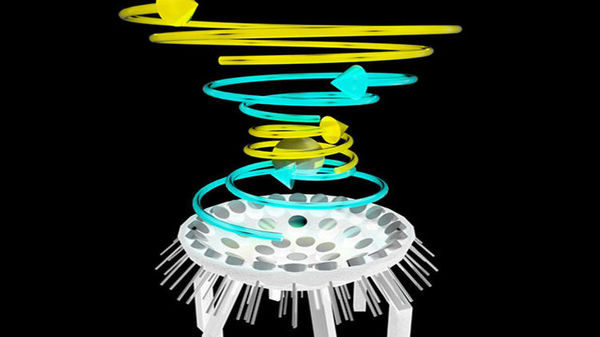 The British physicists managed to create an acoustic levitator, which could use a directional beam from a single source to get large objects to hang in the air, reports Rus.Media.

By creating acoustic vortices configuration you need a special device to keep in the air a polystyrene ball with a diameter of 1.6 cm.

Acoustic levitation of objects is based on creation in the air standing acoustic waves, capable of holding particles in suspension. The mechanism is based on the creation of the interference of coherent sound waves, which are formed in the environment of the local area low and high pressure, able to hold the body in the desired region of space.

This effect is known since the first half of the twentieth century, but until recently, for the implementation of the mechanism of acoustic levitation was necessary to use two sources that are not allowed to create a so-called acoustic zahvati beam (tractor beam).

For the first time the concept of this levitator was developed two years ago by a group under the leadership Asier Marzo (Asier Marzo) from the University of Bristol. Scientists proposed device with a focused acoustic beam is capable to keep in the air polystyrene beads with a size of not more than 4 millimeters. The maximum size of the levitating object then imposed a fundamental limitation: they had to be at least two times less than the length of the standing wave.

This time the same group of scientists have designed an acoustic levitator in which this limitation was overcome through the use of acoustic vortices. Unlike the previous version of the levitator, the new device has a flat geometry and spherical. The proposed device consists of 192 ultrasonic transducers at 40 kHz (and a wavelength of 0.87 cm at room temperature) located on the inner surface of a spherical sector with a diameter of 19.2 cm.

This geometry allows not only to create standing waves, and lead to the formation in air of acoustic vortices, which can pass is placed in the acoustic field of the object angular momentum. Creating in air for several vortices with the same helicity, but directed in opposite directions.

In this field, formed the “virtual vortex”, which you can use to hold suspended objects, even exceed the length of the standing wave, and change the speed of rotation.

As a result, scientists were forced to levitate polystyrene bead size of 1.6 cm, which is almost two times larger than the wavelength of the source. Changing the direction of acoustic vortices and thus controlling the properties of the virtual vortex, it is possible to control the rotation of the ball.

Scientists have also shown that in a two-dimensional configuration (if the ball, for example, is on the table, that is, one coordinate is fixed), such devices can be used to focus and controlled rotation of the larger particles. In particular, scientists managed to control the ball with a diameter of 5 inches, which is almost 6 times larger than the wavelength. Therefore, scientists expect that in the near future such devices is based on creating a “virtual acoustic vortices” will be used for the development of technologies of centrifugation and management of particles of different sizes: from microcapsules to macroobjects.