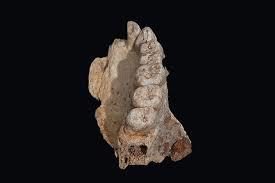 An article about the results of a study published in the journal Science, reports Rus.Media.

In 2002, the student found in the Israeli cave, the left part of the upper jaw. Using three different Dating techniques, the scientists found that the jaw belonged to Homo sapiens, who lived 177-194 thousand years ago. Previously, the oldest human remains outside Africa dated to the period of 90-120 thousand years ago.

In addition to the remains near the cave were found stone tools. This means that archaeologists believe that the emergence of this method of stone processing was associated with the appearance of modern humans in this region of the Middle East. Other artifacts found in the cave indicate that among people were hunters of large animals – deer, gazelles and tours.

“An earlier migration from Africa suggests that cultural or genetic exchange with native populations occurred earlier than previously thought. This is consistent with recent genetic evidence of an earlier human migration out of Africa,” explained Rolf Kam, paleoanthropology with the United States.