Serbia U-21 vs Spain U-21 live streaming free: preview, prediction 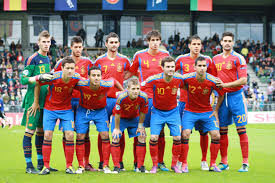 On June 23 at 21:45 in Bydgoszcz at the stadium named after Zdzislaw Krzyszowiecka, the youth national team of Serbia will play against the peers from Spain in the game of the 3rd round of the European Youth Championship.

Serbia U-21 vs Spain U-21 preview
Serbs are famous for their ability to educate young people, but at the current tournament of the Serbian national team it was not lucky with rivals in the group. In the first round, they lost to one of the strongest teams in the category U-21, Portugal 0: 2. In the second round they played a draw with Macedonia 2-2 in the Balkan derby, where no one wanted to lose. Well, now the game with the favorite of all Euro Spaniards. So the current 1 point, with the goal difference 2: 4 is likely to remain the only one in the asset wards Nenad Lalatovich.

Serbia U-21 vs Spain U-21 prediction
The youth of the Spaniards has not lost since March 24, 2016 for 11 meetings, winning 9 times and having drawn twice. In Poland, the wards of Celadez confidently spent the first two games, beating Macedonia 5-0 and Portugal 3-1. The leaders of the team are Asencio, Nyigis, Deulofeu and Bellerin, footballers with a great name. As a result, 6 points with a goal difference of 8: 1 and confident leadership in the table with good chances for the playoffs.

Given the game and the results of the teams in the first rounds, I think that the Spaniards will go through the group round without losing their points and win their group. Bet: victory of the Spanish national team – P2.